Only 246 women in the country hit the qualifying mark of 2:45:00. Bluske ran the California International Marathon with a time of 2:41.13 to book her ticket to the trials. Kertesz ran a 2:42:07 at the same race, while Camp ran a 2:37:37 at the Medtronic Twin Cities Marathon in Minneapolis. 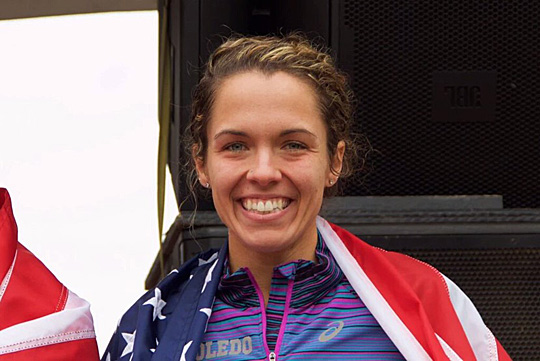 “It’s an honor to be running at the Olympic Trials and compete with some of the top runners in the nation,” Bluske said. “Since I’m going in this year looking to gain experience, there’s less pressure.”

Two former UT runners and Bluske running in the event shows the success of the Toledo track and field program.

“Once athletes leave Toledo, they still have a love and burning passion for running,” Bluske said. “To have two alums and an assistant coach in the event is rare, and it’s a great opportunity for the program. It shows how successful our athletes are collegiately and the possibility of running post-collegiately.”

The course will begins at the Staples Center, cuts through the campus of the University of Southern California and downtown Los Angeles, and ends at the L.A. Memorial Coliseum. The course begins with a 2.2-mile stretch and ends with a 6-mile loop that participants will run four times.

The top three finishers will qualify for the 2016 Olympics in Rio De Janeiro. The race will be shown live on NBC beginning at 10 a.m. Pacific Time (1 p.m. Eastern Standard Time) and on the NBC Sports Live Extra App.