Former Toledo wide receiver Alonzo Russell has been invited to participate in the NFL Combine at Lucas Oil Stadium in Indianapolis this week.

Russell, who is one of just five players from the Mid-American Conference to be invited to the combine, is scheduled to report Thursday, Feb. 25, and work out with other wide receivers Saturday, Feb. 27. 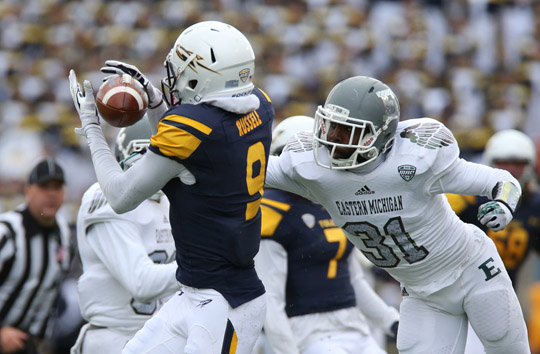 Wide receiver Alonzo Russell pulled in 24 touchdown catches during his career and is second in that category on UT’s all-time list.

He was a four-time All-MAC receiver for the Rockets, earning second-team all-league honors in 2015. He is only the second Rocket ever to earn All-MAC honors four times. The other two were former NFL offensive lineman Nick Kaczur (2001 to 2004) and current Dallas Cowboy safety Barry Church (2006 to 2009).

Russell caught 202 passes in his career, which ranks fifth on UT’s all-time list. He also ranks third in receiving yards with 3,076 and second in touchdown catches with 24.

He set the school record by catching at least one pass in 50 straight games, every game in his college career.

The NFL Draft will take place Thursday through Saturday, April 28-30, in Chicago.