The Rockets recorded three event victories, nine podium appearances, and 12 top-10 finishes to tally 60.5 points, one-half of a point ahead of seventh-place Miami. 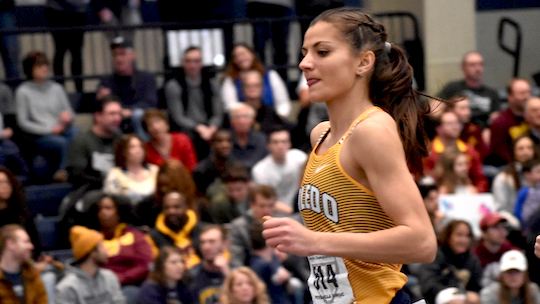 Petronela Simiuc captured event wins in the 800 meters and mile Feb. 29 at the MAC
Indoor Championships in Akron, Ohio.

Saturday’s action was highlighted by Simiuc breaking her own 800-meter record to clinch gold with a time of 2:07.46. Toledo’s previous record was 2:08.23 set by Simiuc Feb. 21 at the Silverston Invitational at Michigan in Ann Arbor.

In addition to Saturday’s event win, the Rockets took first in the distance medley relay to cap competition Friday.

Senior Stephanie Sherman earned another podium appearance and personal-best, placing fourth in the 3,000 meters with a time of 9:53.00.

“I’m so proud of my athletes and my staff for all the hard work they put into this championship weekend. We came into the MAC Championships with a plan, and I feel we executed it,” said Head Coach Andrea Grove-McDonough. “Petronela played a major role in the team’s success, especially with her performances in the 800 meters, mile and distance medley relay. We walked away with a handful of personal bests and incredible performances from the team that we look to build on rolling into the outdoor season.”

Senior Raynesha Lewis also received recognition for her efforts in the long jump, earning Second-Team All-MAC for her performance Friday.

Qualifiers for the NCAA Indoor Championships Friday and Saturday, March 13-14, in Albuquerque will be finalized Tuesday, March 3.

The Rockets will open the outdoor season Friday, March 20, with the Blizzard Buster hosted by Miami in Oxford, Ohio.