Construction on The University of Toledo’s Main Campus will cause road closures for several months.

The David Leigh Root Bridge, located on Stadium Drive behind the Snyder Memorial Building, is scheduled to be closed for construction starting Monday, March 7, through Friday, Aug. 12. 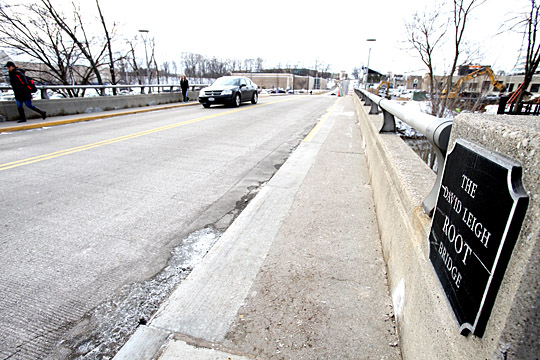 The David Leigh Root Bridge on Stadium Drive is scheduled to close Monday, March 7, and reopen in August.

Alternate walking and driving routes will remain available during construction. Signage will be placed around campus to redirect traffic.

Following routine inspection, it was determined the bridge, built in 1961, needed to be replaced due to age and condition, said Jason Toth, associate vice president for facilities and construction.

“The new bridge will be constructed with six-foot-wide sidewalks on both sides replacing the current three-foot walks that cause students to walk in the street when passing one another,” Toth said. “The new bridge also will incorporate aesthetics that blend with the Gothic architecture on campus.”

Lots 5 and 6 west of Savage Arena and the track, lot 10 north of the Glass Bowl, and lot 11 behind the Snyder Memorial Building will remain open during construction.