Alona Matchenko, a law student at The University of Toledo, is leading a demonstration on campus Thursday, March 3, to stand with Ukraine.

The Toledo Helps Ukraine rally starts at 5:30 p.m. in the Thompson Student Union Auditorium. Attendees, who are encouraged to make signs, will then march to the Law Center. 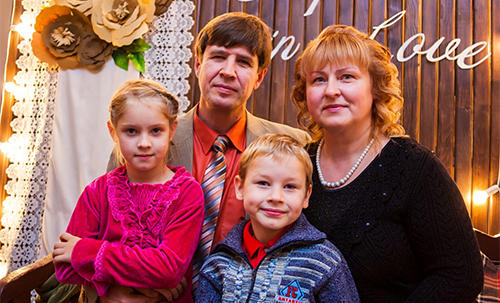 Alona Matchenko was a schoolteacher in Kyiv, Ukraine, before she moved to the U.S. about five years ago, but her family still lives in Ukraine. From bottom left, her sister, Nadia Chipil, and her brother, David Chipil. Top row from left, her stepfather, Ruslan Chipil, and her mother, Vera Chipil.

“Many people I love are facing war and death outside their windows,” Matchenko said. “They cannot buy food or water because store shelves are empty. It’s unlikely families have supplies that can last many days or weeks.”

Matchenko was a school teacher in Kyiv, Ukraine, before she moved to the U.S. about five years ago. She lives in Toledo with her husband and daughter and owns a business. However, her mother, stepfather and two young siblings remain in Ukraine.

After Russia invaded Ukraine last week, she started a Facebook group called Toledo Helps Ukraine to organize demonstrations, raise money and gather supplies for Ukrainian citizens. She has connected with several other Ukrainian families living in Toledo to lead the support effort.

“I can’t just sit and watch the war unfold in my beloved home country,” Matchenko said. “I’m receiving text messages from my family and people I grew up with and people I worked with saying that they are scared and need to be in a bomb shelter. We have no idea what is going to happen, and we need to do something to help them. We have an opportunity here in the United States to help those who are suffering and fighting for their land and their freedom in Ukraine. Please come to the rally and stand with Ukraine.”

The group’s objectives include organizing demonstrations to raise awareness; raising funds and supplies for Ukrainian citizens; easing immigration and asylum restrictions for Ukrainian refugees; drafting resolutions that provide affirmative aid to Ukraine; and petitioning for sanctions or other such conduct for the de-escalation of the war in Ukraine.

Free parking will be available during the event in lots 10, 1N and 1S.