No. 1 Toledo Opens MAC Tournament Against No. 8 Ohio on Wednesday

Postseason play for the Toledo women’s basketball team begins on Wednesday, March 9, at the MAC Tournament in Cleveland. The No. 1 seed Rockets will face the No. 8 seed Ohio Bobcats at 11 a.m. on ESPN+. 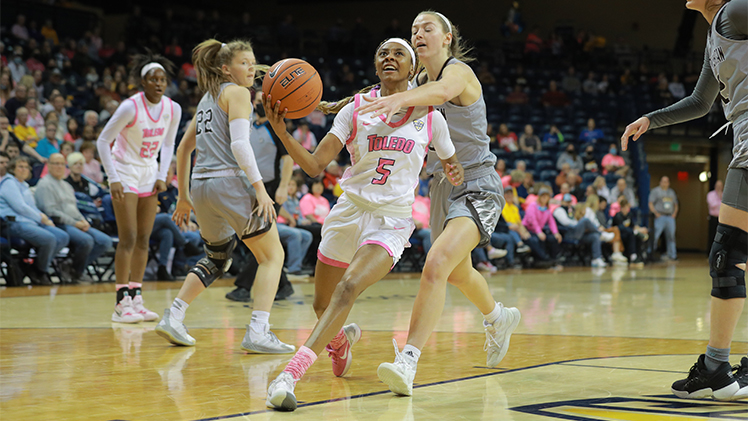 Toledo enters the MAC Tournament having won 11 straight games, its second winning streak of at least eight games this season.

Toledo also just wrapped up one of the best seasons in recent memory, posting a 25-4 overall record and a historic 19-1 ledger in MAC play, a new conference record for most league wins in a season. The Rockets captured their 10th MAC Regular Season Championship in program history and their first since 2012-13 and reached the 25-win plateau for just the 12th time.

Toledo’s lone blemish in conference play, though, came at the hands of the Bobcats on Jan. 26 in a 79-72 loss at home.

Toledo led by as many as nine late in the third quarter of that game but saw its offensive well run dry against a hot-shooting Ohio team in the fourth quarter. UToledo made just 5-of-20 shots in the final frame while the Bobcats shot 81.8 percent (9-of-11). Sammi Mikonowicz tied a school record with 22 rebounds that night, while Ohio’s CeCe Hooks scored a game-high 30 points.

The Rockets exacted revenge in the second meeting on Feb. 16 in Athens, overcoming a 17-point deficit to win 76-73.

With 3:02 remaining in the second quarter, Hooks made both free throws to make the score 40-23. Toledo closed the gap to 11 points before the end of the half, then proceeded to outscore the Bobcats 29-16 in the third quarter to take a 60-58 lead, its first of the night.

Ohio fought back to tie the score at 68-68 with 4:23 left in the game, but on the next possession, Quinesha Lockett’s three-point play gave Toledo the lead for good. Sophia Wiard had a terrific night, scoring a season-high 26 points on 9-of-11 shooting and providing a critical block with 55 seconds remaining on what would have been the go-ahead basket.

For more information about the 2022 MAC Tournament, fans can visit utrockets.com/MACTournament to learn more about tickets, pregame festivities and more.