The Toledo men’s basketball team fought off a feisty Western Michigan squad and punched its ticket to Cleveland on Monday evening with a 76-73 victory in a first-round Mid-American Conference Men’s Basketball Tournament matchup in Savage Arena.

The No. 7 seeded Rockets’ victory places them in the quarterfinals against No. 2 seed Bowling Green (21-11) Thursday, March 12. Tipoff time for the contest is 6:30 p.m. in Rocket Mortgage FieldHouse with streaming on ESPN Plus. 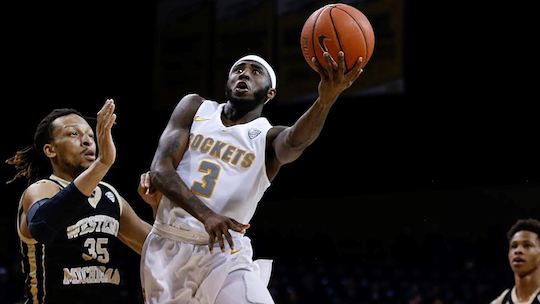 Junior Marreon Jackson paced Toledo (17-15) with 25 points, including 18 in the opening 20 minutes. Seniors Willie Jackson and Luke Knapke each registered a double-double for the second straight game. Willie Jackson tallied 22 points and a game-high 16 rebounds, while Knapke contributed 18 points and 11 boards.

“I thought tonight was a gutty performance by our guys,” Head Coach Tod Kowalczyk said. “We moved the ball well offensively and had 16 assists with only eight turnovers. I thought we guarded for 40 minutes. Western Michigan’s runs were created by [Michael] Flowers and [Brandon] Johnson hitting incredibly tough shots. I thought Willie and Spencer [Littleson] did a great job defensively against them.”

The Broncos held a 43-37 advantage in the rebounding department, but Toledo was able to offset that by going 9 for 22 (40.95) from three-point range and committing just eight turnovers.

The Rockets started strong in each half only to see Western Michigan rally from double-digit deficits. Toledo held a 16-point advantage in the opening 20 minutes before the Broncos closed to within four late in the half.

In the second stanza, the Rockets scored the first 10 points after intermission and eventually built their lead to as many as 19 points. Flowers trimmed the Rockets’ lead to a single point, 70-69, at the two-minute mark. Willie Jackson tipped in a miss on Toledo’s next possession for a three-point lead. He then came up with a steal that turned into a 74-69 lead with 54 seconds left.

The UToledo Alumni Engagement Office will host a pregame party at 4:30 p.m. before the game at Harry Buffalo (2120 E. 4th St., Cleveland) just across the street from Rocket Mortgage FieldHouse. Admission is $15. The all-you-can-eat menu for March 12 will include buffalo chicken egg rolls, traditional wings, chicken salad croissants, beef sliders with cheese, and a house salad. Soft drinks and iced tea are included with the meal. A cash bar will be available.