Toledo secured a nail-biting 63-59 victory over Akron Monday in the first round of the Mid-American Conference Tournament in James A. Rhodes Arena.

The No. 9 seed Rockets (13-17) advance to the MAC Tournament Quarterfinals to face No. 1 seed Central Michigan (23-6) at noon Wednesday, March 11, at Rocket Mortgage FieldHouse in Cleveland. 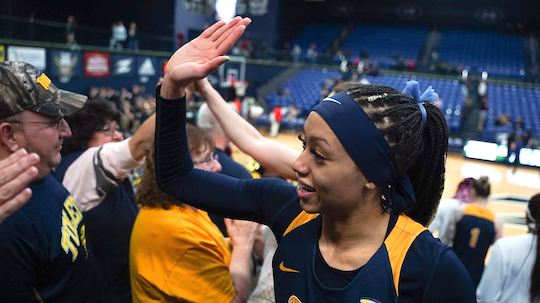 Junior Nakiah Black scored 17 points vs. Akron in the first round of the MAC Tournament.

Junior Nakiah Black scored 15 of her team-high 17 points in the second half, and junior Tanaya Beacham contributed 15 points and a game-high 12 rebounds to lead a balanced Toledo attack.

The Rockets posted a sizable 37-27 advantage on the glass and finished with 13 assists, compared to only 12 turnovers to run their record to 6-2 all-time against the Zips in the conference tournament.

Haliegh Reinoehl paced the No. 8 seed Zips (15-15) with a game-high 21 points, followed by Shaunay Edmonds and Jordyn Dawson with 11 and 10 points, respectively.

The UToledo Alumni Engagement Office will host a pregame party at 10 a.m. before the game at Harry Buffalo (2120 E. 4th St., Cleveland) just across the street from Rocket Mortgage FieldHouse. Admission is $15. The all-you-can-eat menu for March 11 will include chicken tenders, sheet pizza, beef sliders with cheese, boneless wings and a veggie tray. Soft drinks and iced tea are included with the meal. A cash bar will be available.