This event has been canceled due to concerns about the coronavirus.

University of Toledo senior Petronela Simiuc has punched her ticket to the 2020 NCAA Indoor Track & Field Championships this week hosted by the University of New Mexico at the Albuquerque Convention Center.

The Bacau, Romania, native will compete in the mile event. The women’s mile preliminary round will be held Friday, March 13, at 7:35 p.m. Eastern Time. 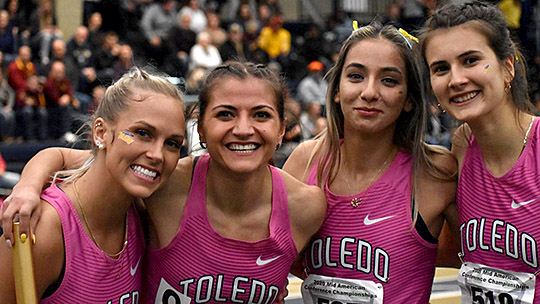 Over the course of the indoor season, Simiuc broke Toledo’s record in the mile and 800 meters twice each. On Jan. 24, Simiuc clocked a time of 4:38.40 in the mile at the John Thomas Terrier Classic in Boston, smashing the previous record of 4:39.81 set by Megan Wright in 2014. She later broke her own record with a time of 4:34.59 to place fifth at the David Hemery Valentine Invitational Feb. 14 also in Boston.

Simiuc closed out the regular season by breaking Toledo’s 800-meter record at Michigan’s Silverston Invitational Feb. 21 with a time of 2:08.23, surpassing the previous record of 2:09.20, held by Janelle Noe. At the Mid-American Conference Indoor Track & Field Championships in Akron, Ohio, Simiuc rebroke the 800m record, posting a time of 2:07.46 in the final to place first.