The YWCA of Northwest Ohio recognized University of Toledo Professor of Social Work Celia Williamson during its 21st annual YWCA Milestones: A Tribute to Women March 10.

Awards were given to local women in seven categories: arts, sciences, volunteerism, education, business, government and social services. Each recipient has reached significant milestones in her field, demonstrated exceptional leadership qualities, and empowered other women to reach their full potential. 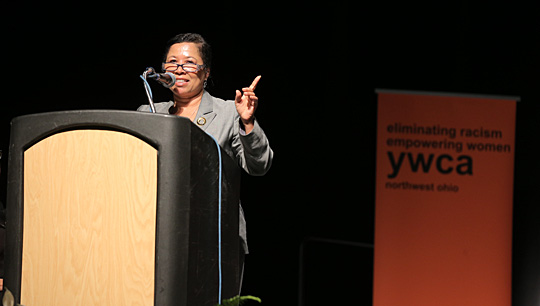 Dr. Celia Williamson spoke at the YWCA Milestones: A Tribute to Women, where she was recognized in the social services category for her efforts to fight human trafficking.

Williamson, who has devoted years of her time to fight human trafficking and other social injustices, was the recipient of the social services category award.

In 1993, Williamson founded Second Chance in Lucas County, the first program of its kind in Ohio that works with women and children who have been victims of prostitution and human trafficking.

In addition to her work with the Second Chance program, Williamson serves as director of the Human Trafficking and Social Justice Institute at The University of Toledo. Opening in April 2015, the institute was created to respond to human trafficking by teaching, research and service.

Williamson fit criteria for selection for the YWCA Milestones Award: strong leadership, exemplary achievements on campus and in the community, and living a life aligned with the YWCA mission.

“It is a great honor to receive such a prestigious award from the YWCA whose mission is to eliminate racism and empower women,” Williamson said.