The recent announcement that Bruce Willis, one of the most bankable action stars of the last four decades, was stepping down from acting following an aphasia diagnosis has thrust the largely unfamiliar communication disorder into the spotlight. 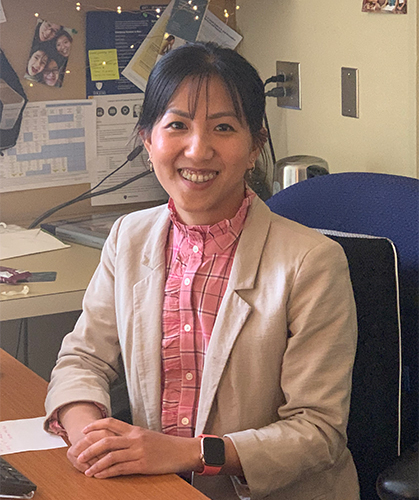 Despite that, aphasia has little name recognition. A 2016 survey from the National Aphasia Association found less than 9% of U.S. adults could correctly identify the language disorder, which is caused by damage to the brain.

“That damage can be due to a sudden medical event like a stroke, or it could be due to a neurodegenerative disease with a more subtle, slow onset,” said Dr. An Dinh, an aphasia researcher and assistant professor in The University of Toledo’s Speech-Language Pathology Program. “Any aspects of language can be affected, and everyone’s aphasia is very different.”

In news coverage about Willis, aphasia has at times been described as a condition that eventually robs someone of all ability to communicate, but Dinh said there’s a much wider range of ways in which aphasia affects people.

Some people struggle more with producing written and spoken language, while others have more difficulty with language comprehension. Some people are aware of their language deficit and attempt to compensate; others aren’t as aware.

“It is important to note that aphasia does not affect a person’s intellect. Rather, it affects their ability to communicate ideas and thoughts,” Dinh said. “Their personality is still there.”

One of the most common characteristics of aphasia is dysnomia, or trouble with word finding — essentially an intense version of the tip-of-the-tongue feeling everyone has from time to time.

The differences in individual symptoms and severity are largely a result of which specific parts of the brain are damaged, the reason for the damage and how severe the injury is. That also affects how well aphasia can be treated with speech therapy, Dinh said.

“If aphasia is due to a stroke or tumor, usually people get better with therapy,” she said. “If it’s primary progressive aphasia, it’s due to a neurodegenerative disease and they won’t get better, so we just try to help them stay where they are for as long as they can.”

There are two main strategies speech-language pathologists employ when working with people with aphasia.

Restorative therapy, used primarily for sudden-onset aphasia, is aimed at bringing back aspects that have been lost due to brain injury and might include drills, functional therapy and identifying cues that can help someone when they get stuck.

Primary progressive aphasia, which comes on slowly because of atrophy in the parts of the brain that control communication, is progressive, often eventually leading to dementia-like symptoms in addition to the deterioration of language skills.

For those individuals, therapy is focused on preserving their language skills and/or finding other ways to communicate, such as assembling a book that patients can use to point at images to communicate their wants and needs.

For all individuals with aphasia, Dinh said it’s important that those around them show patience when communicating.

Researchers are working to learn more about the specific cause for primary progressive aphasia and to develop new treatment methods to prolong the ability to communicate effectively.

Dinh’s own research is focused on the social and emotional needs of people with aphasia. Specifically, she is interested in the shift in social needs and relationship priorities in older adults with aphasia.

It’s common for individuals’ social networks to change after a stroke, particularly if they experience aphasia, she said. The typical way of thinking about therapy is that by improving their speech, they’ll again widen their social circle. Dinh said this approach tends to be impairment-based and may not be motivating to the clients.

“I’m trying to flip it — let’s think about what’s important to that person socially and emotionally first and then write therapy goals that can help them maintain and nurture those meaningful relationships,” Dinh said.

The UToledo Speech-Language-Hearing Clinic also houses the DaZy Centre, which provides free, twice-weekly group therapy for adults with aphasia. No referrals are necessary for the program, which is led by advanced graduate students from UToledo’s Speech-Language Pathology Program and overseen by licensed therapists.

For more information, individuals can call 419.530.4339 or visit the DaZy Centre website.