Seven University employees were recognized last week for excellence and dedication to the campus community at the 30th annual Outstanding Women’s Award ceremony.

More than 80 attended the University Women’s Commission program, which was held Thursday in the Savage Arena Joe Grogan Room. Dr. Patsy Komuniecki, vice provost for graduate studies and dean of the College of Graduate Studies, spoke at the event.

The recipients of the Dr. Alice Skeens Outstanding Woman Award were:

• Sara Clark, director of global engagement and the American Language Institute. She has worked at the University eight years. She received bachelor’s and master’s degrees in education from UT in 2004 and 2007, respectively.

“Sara is totally involved on campus. She goes to most every campus event with dozens of international students. She also teaches two UT evening courses on service learning. Sara is an adviser to the UT Student Explorers, which involves both domestic and foreign students in many exciting trips and activities throughout the region,” a nominator wrote. “She performs her job with a combination of positive energy, absolute integrity, and a powerful can-do attitude. I am so grateful to have such a devoted and talented woman here as our leader.” “Sara helped create the American Language Institute Student Council and went to great lengths to make certain that our women students were well-represented. They gain excellent leadership skills,” another noted. “Sara is both respectable and respected. I am very impressed by Sara’s devotion to her students and to the entire University.”

• Nadine Hoffmann, an assistant to the undergraduate dean in the Office of Undergraduate Studies in the College of Engineering. Previously, she worked for two deans in the College of Law, but spent most of her tenure at the former UT Community and Technical College. Hoffmann received associate’s and bachelor’s degrees from UT in 1994 and 2007, respectively.

“Nadine is a critical person in our office, and she excels in customer service. She is the first voice people hear when they call our office and the first face they see when they enter our office. Each day, our office has between one and 20 prospective students visit for a presentation and a tour. Ms. Hoffmann takes time to personally greet and speak with each family. She helps answer their initial questions, calms their nerves, and welcomes them to the College of Engineering. Her positive aura is a blessing for these prospective students and gives our college a friendly face,” a nominator wrote. “She also is actively involved in her church, Cedar Creek. She has taught Bible study and volunteers at the soup kitchen weekly.”

• Nicole Porter, professor of law. She joined the College of Law faculty in 2007. She served as associate dean for academic affairs from 2010 to 2012.

“Professor Porter served on the University’s Sexual Harassment Task Force and was one of the principal drafters of the new UT Sexual Harassment Policy, promulgated in 2011,” one nominator wrote. “Professor Porter conceived and developed a junior faculty orientation for new College of Law faculty members. Even more significant has been the informal mentorship she has provided to junior faculty members, in particular persons of color and female faculty members.” Another noted, “As a scholar, Professor Portman is exemplary. Her research has consistently attracted national attention. And many of her articles have focused squarely on women’s issues, including ‘Women, Unions and Negotiation,’ ‘Sex Plus Age Discrimination: Protecting Older Women Workers,’ ‘Debunking the Market Myth in Pay Discrimination Cases,’ ‘Finding a Fix for the FMLA: A New Perspective, a New Solution,’ and ‘The Caregiver Conundrum Redux: The Entrenchment of Structural Norms.’ All of her work is widely read, cited and influential.”

“Despite her daunting duties as senior associate dean, Dr. Schneider teaches every semester for the Department of English and in fall 2016 will teach a class for the Department of Women’s and Gender Studies,” one nominator wrote. “She is creative and tireless in her efforts to support every college initiative and to promote and support students. Whatever the task, she works quietly and efficiently behind the scenes, never seeking credit or functioning in self-serving ways, and always maintaining a positive attitude and good humor.”

“Ms. Sullivan is highly deserving of this award as she exemplifies the work of women as foundational to family life and community life, and as the often invisible, or at least ignored, work that is essential to maintaining an institution like The University of Toledo as a healthy, thriving institution,” a nominator wrote. After her husband was diagnosed with cancer, she cared for him at home for two years until he passed, according to a nomination. Then she took on more responsibility at the Paradise Baptist Church, which was founded by her husband. “Since the church was a small community of low-income people in Toledo, she took two things she loves and combined them together, spiritual and physical food. The corner of Tecumseh and Detroit became a place where people could stop by and get some good soul food and receive a message of hope and love.” 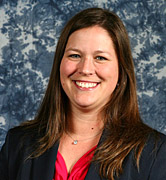 • Dr. Mary Beth Wroblewski, assistant professor of pediatrics, pediatric clerkship director, and assistant dean for student affairs in the College of Medicine and Life Sciences. She received a bachelor of science degree in pharmaceutical science from UT in 1998 and a doctor of medicine degree from MCO in 2005. She completed post-graduate training at UT and served as chief resident her final year. Wroblewski has received many awards, including the Dean’s Award for Teaching Excellence.

“Dr. Wroblewski oversees pediatric education for 350 third- and fourth-year medical students each year. She listens to the medical students and works diligently to lead them to solutions that work for them and gets them back on track. She does this with a great deal of humility, compassion and humor,” one nominator wrote. “Her most recent involvement in the community is her pediatric clinic at Toledo Public Schools. She also is very involved with the recent epidemic of babies addicted to methadone. She also is an active supporter of women’s issues and is very involved educating parents on the health care of children as well as the importance of vaccinating children.” 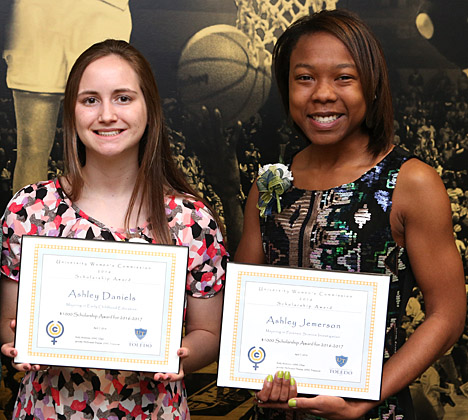 Students receiving scholarships from the University Women’s Commission were Ashley Daniels, left, and Ashley Jemerson. Batool Mehdi also received a scholarship, but she was unable to attend the event.