Three University of Toledo faculty members are featured in a new documentary film about the effects of harmful algal blooms in Lake Erie.

“The Erie Situation” focuses heavily on the 2014 Toledo water crisis and the aftermath of that event, including advances in monitoring cyanotoxin levels in the lake and new biomedical research aimed at better understanding how harmful algal blooms impact the health of individuals who spend time on or near the lake. 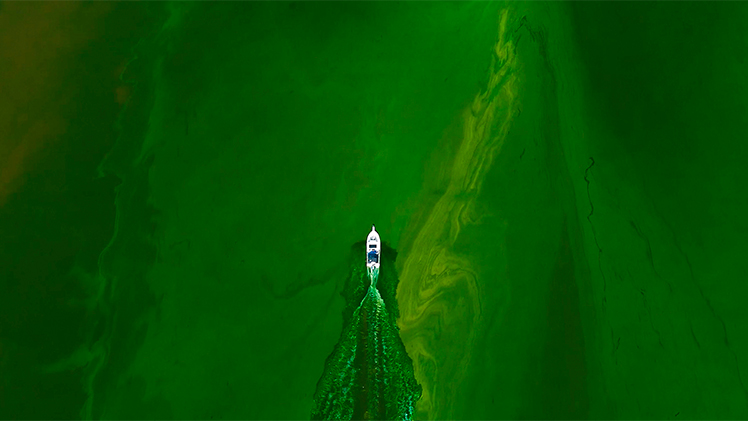 In this still from the film “The Erie Situation,” provided by Plastic Oceans International, a small boat cuts through blue-green algae on Lake Erie. The documentary features three UToledo faculty experts.

Directed by Michigan-based filmmaker David Ruck, the documentary premiered earlier this month at the Cleveland International Film Festival, where it won the Global Health Competition.

Ruck and his team visited UToledo’s Health Science Campus and Lake Erie Center in 2019. They conducted a series of interviews and observed the annual HABs Grab, where environmental scientists from the U.S. and Canada fan out across western Lake Erie to collect water samples and then return to the Lake Erie Center to analyze what they’ve collected.

The team is also collaborating with other UToledo investigators to develop new diagnostic testing for microcystin exposure.

“The Erie Situation” is a production of Plastic Oceans International and Great Lakes Outreach Media. The film is available for on-demand streaming through the Cleveland International Film Festival through Sunday, April 17.

A screening also is planned for 6 p.m. on June 12 at the Maumee Indoor Theatre.

Kennedy, Haller and Bridgeman are part of UToledo’s Water Task Force, which was formed in response to the city of Toledo’s “Do Not Drink” water advisory in 2014.

The task force is made up of more than 30 faculty members from across the University working to protect water quality and the health of Lake Erie. UToledo scientists, engineers, medical researchers and public health and legal experts collaborate closely to advance ways to improve water quality and inform stakeholders about our latest research findings.