Next month, Tammy Wilhelm will graduate from The University of Toledo with a master’s degree alongside her roommate — who also happens to be her son.

“I think we help each other. He starts the laundry and I finish it, or I start it and he finishes it. We’ll both be studying at the same time. It’s kind of like we live in the dorm together sometimes,” she said with a laugh.

Wilhelm, who has worked as a registered nurse for more than 30 years, chose to return to school four years ago to work toward a master of science in nursing degree in UToledo’s Family Nurse Practitioner Program.

Her youngest son, Austin Wilhelm, is wrapping up his master’s degree in athletic training after earning a bachelor’s degree in exercise science from UToledo in 2020.

They’re both set to graduate Friday, May 6.

Tammy Wilhelm has spent her nursing career in pediatrics, particularly in pediatric intensive care and patients with congenital heart disease.

After toying with the idea of going back to school for years, she finally enrolled part time at UToledo in 2018 in hopes of returning to a specialized pediatric congenital heart office as a nurse practitioner.

For Wilhelm, the work is not only her passion, it also has a personal connection — her daughter, now 27, has a congenital heart defect.

To help in this growing field, Wilhelm elected to pursue the family practice program rather than the pediatric program.

“The older you get the harder it is to start a new job, but I’m excited to start a new phase,” she said. “The University has a truly good nursing program. It’s been a challenge with COVID, but I got to do a capstone based on something I really wanted to do.” 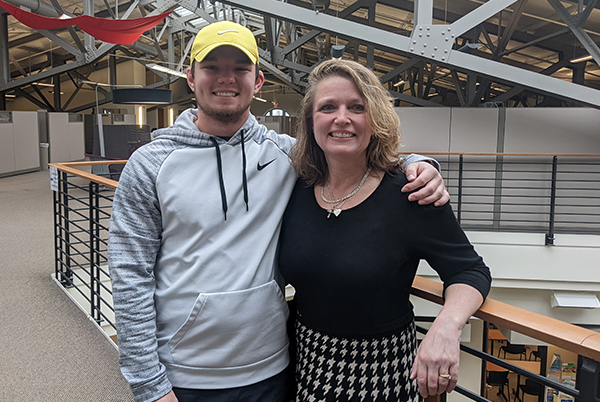 In that capstone project, Wilhelm had the opportunity to work with a local high school to build an emergency response plan in the event that someone goes into sudden cardiac arrest.

The program, which includes education, training and drills along with ensuring individuals know how to use an automated external defibrillator, is expected to soon be certified through the national nonprofit Project ADAM.

Dr. Mary Jean Ohns, an associate professor of nursing and a pediatric nurse practitioner, said Wilhelm is a highly motivated student who quickly had a great idea for her capstone.

“The implementation of Project ADAM in schools can literally save lives — how powerful is that?” said Ohns, who served as Wilhelm’s capstone advisor. “This is an excellent example of how nurse practitioners take the skills they learned in school to make valuable contributions in their professional practice.”

Austin Wilhelm, who said he was partially inspired to go into a health-related field because of his mother, started at UToledo in the physical therapy program and elected to live at home with his parents to save money. As a junior he switched his major to athletic training.

“I had a class that was more of a foundation of sports medicine and we got to shadow athletic trainers. I like working with a younger population, being able to be outside of the clinic some and being around athletics,” Austin Wilhelm said. “I just realized it was a better fit for me and it was an easy switch.”

Immediately after graduation he enrolled in the master’s program.

“I knew campus well and the professors I’d had were very personable,” he said. “They really try to get to know you and find ways to teach you and help you get through the program. They want to see you succeed.”

Austin Wilhelm recently completed a 10-week clinical rotation with the Wake Forest baseball team and is now working with the UToledo baseball team. After graduation, he hopes to work either with collegiate or high school athletes.