The University of Toledo is among four Ohio universities to receive a total of $2.08 million from the Ohio Department of Higher Education’s Harmful Algal Bloom Research Initiative in this year’s round of state funding to address Lake Erie water quality and find solutions for algal bloom toxicity.

• Dr. April Ames and Dr. Michael Valigosky, assistant professors in the School of Population Health in the College of Health and Human Services, will assess microcystin inhalation risk to shoreline populations;

• Dr. Steven Haller, assistant professor in the Department of Medicine in the College of Medicine and Life Sciences, will work to create a new therapy for microcystin exposure and hepatotoxicity using naturally occurring Lake Erie bacteria that removes microcystin released by harmful algal blooms in drinking water;

• Dr. Von Sigler, professor of environmental microbiology in the College of Natural Sciences and Mathematics, will investigate any risks to beach visitors who come in contact with sand along a beach that has had bloom-enriched water wash up on the shoreline. 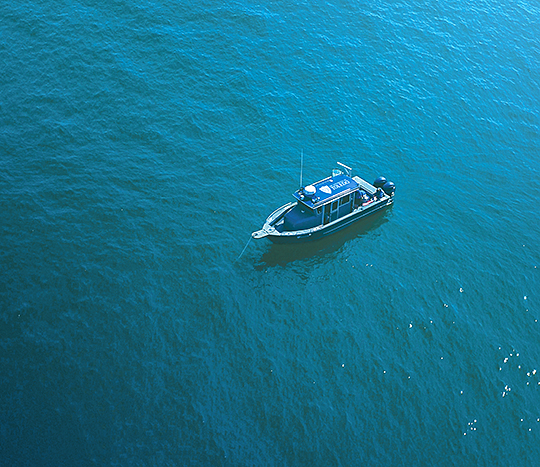 “Foreshore sands are frequently contacted by beach visitors and are known to play a crucial role in accumulating bacteria, often harboring potentially pathogenic bacteria in densities exceeding those in nearby waters,” Sigler said. “Although no data is currently available that describes the ecology of microcystis in sands, there is potential for human health impacts.”

UToledo and Ohio State University lead the Harmful Algal Bloom Research Initiative, which consists of dozens of science teams across the state and is managed by Ohio Sea Grant. 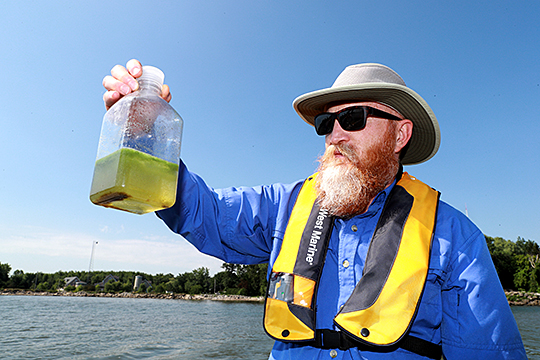 “Thanks in part to past HABRI projects, the primary threat of microcystin algal toxin to our Lake Erie-sourced drinking water has been greatly diminished,” said Dr. Thomas Bridgeman, professor of ecology, director of the UToledo Lake Erie Center and co-chair of the Harmful Algal Bloom Research Initiative. “Even under the best-case scenario, however, we are likely to be living with harmful algal blooms for many years to come. This new set of HABRI projects allows us to follow up with questions about other algal toxins such as saxitoxin and anatoxin that we know much less about, long-term exposure to toxins, and secondary routes of exposure, such as inhalation.”

Harmful algal blooms are not only a Lake Erie problem.

“Many lakes and rivers across Ohio are having similar issues,” Bridgeman said. “Several new projects are dedicated to helping smaller Ohio lakes and rivers use remote sensing, groundwater tracing and improved toxin-testing methodology.”

“Lake Erie is an invaluable resource and a true treasure for the state of Ohio, and we have a responsibility to do all we can to preserve it and protect it,” said Randy Gardner, chancellor of the Ohio Department of Higher Education (ODHE). “I’m pleased that our university researchers are collaborating to lead this endeavor.”

“Direct engagement with these front-line agencies continues to allow HABRI scientists to develop research proposals that address both immediate and long-term needs of the people tackling this important statewide issue,” said Dr. Kristen Fussell, assistant director of research and administration for Ohio Sea Grant, who leads the initiative’s daily administration.

A total of $9.1 million in funding was made available through ODHE in 2015 and designated for five rounds of HABRI projects. Matching funding from participating Ohio universities increases the total investment to almost $19.5 million for more than 60 projects, demonstrating the state’s overall commitment to solving the harmful algal bloom problem.

Information about HABRI projects, partner organizations and background on the initiative is available on the Ohio Sea Grant website.

The UToledo Water Task Force, which is composed of faculty and researchers in diverse fields spanning the University, serves as a resource for government officials and the public looking for expertise on investigating the causes and effects of algal blooms, the health of Lake Erie, and the health of the communities depending on its water. The task force includes experts in economics, engineering, environmental sciences, business, pharmacy, law, chemistry and biochemistry, geography and planning, and medical microbiology and immunology.

Water quality is a major research focus at UToledo, with experts studying algal blooms, invasive species such as Asian carp, and pollutants. Researchers are looking for pathways to restore our greatest natural resource for future generations to ensure our communities continue to have access to safe drinking water.