A team led by a social work researcher at The University of Toledo has published the first empirical evidence that emotional support animals can provide quantifiable benefits to individuals with serious mental illness who are experiencing depression, anxiety and loneliness.

The research brings credence to the many anecdotal reports of emotional support animals having positive impacts on chronic mental health issues. 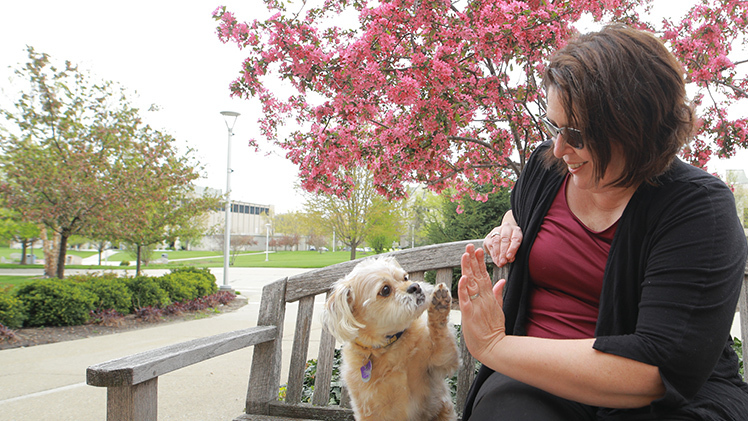 Dr. Janet Hoy-Gerlach, a professor of social work at UToledo, led research that is the first to offer empirical evidence that emotional support animals can provide benefits to individuals with serious mental illness.

“This is the first peer-reviewed, published scientific evidence that emotional support animals may benefit people’s mental health,” said Dr. Janet Hoy-Gerlach, a professor of social work and the lead investigator on the project. “My hope is that our pilot study catalyzes additional research in this area with more rigorous methodology.”

Emotional support animals need no formal training or certification but are recognized in writing by a health or mental healthcare professional as therapeutically needed for a person with a health or mental health condition. The person’s condition must meet the definition of a disability under the Fair Housing Act, a federal housing policy that protects against disability-related housing discrimination.

In the UToledo pilot study, researchers from the College of Health and Human Services followed a small group of study participants who were paired with a shelter dog or cat through the Hope and Recovery Pet Program, an innovative community partnership of UToledo, the Toledo Humane Society and ProMedica.

Participants in the study, all of whom met low-income criteria and were identified as at risk of social isolation, were referred by their mental health providers.

Hoy-Gerlach and her collaborators regularly tested participants for changes in a trio of biomarkers related to stress and bonding, and administered surveys about participants’ depression, anxiety and loneliness prior to adoption and at the end of the 12-month study period.

At the conclusion of the study, they found a statistically significant decrease in participants’ depression, anxiety and loneliness as measured by standardized scales.

The researchers also observed a consistent pattern of higher amounts of the bonding hormone oxytocin and lower amounts of the stress hormone cortisol after participants engaged in focused interactions with their emotional support animal for 10-minute periods.

While not a statistically significant finding, the analysis hinted that participants may have benefited from their animals at a biological level.

“The biomarker findings, along with the standardized depression, anxiety and loneliness surveys and qualitative interviews together suggest insights into how emotional support animals may help reduce symptoms and loneliness associated with chronic mental illness,” Hoy-Gerlach said. “We can’t make any generalizations or big sweeping claims, but the findings are pretty straightforward for this particular group of people.”

Researchers observed the highest oxytocin increase at the 12-month mark, which could indicate participants’ bond with their dog or cat had strengthened over time.

Qualitative research corroborated this idea: In open-ended interviews, study participants talked about feeling much more emotionally attached to their respective animals at the end of the study.

The research, published Monday in the Human-Animal Interaction Bulletin, builds on Hoy-Gerlach’s previous research into the human-animal bond and could lead the way toward new thinking about how emotional support animals can be implemented as a strategy in managing chronic mental health issues.

A trained clinical social worker who has extensive experience in counseling, crisis work and public mental health, Hoy-Gerlach’s interest in studying how animals affect mental health began after working on assessments for suicide and finding people’s pets were frequently a protective factor.

She has since devoted much of her academic research to the topic. In 2017, she published the book “Human-Animal Interactions: A Social Work Guide.”

While the recently published study was small in nature, Hoy-Gerlach said it could serve as a major step toward demonstrating the value of emotional support animals for human health.

“We have seen a significant increase in social isolation because of COVID-19, particularly among those most vulnerable to its effects. While our research was initiated before the pandemic, the findings couldn’t be more applicable,” she said. “Now more than ever, we need to be thinking about leveraging every resource at our disposal.”

Such efforts can benefit both people and animals in need. The Hope and Recovery Pet Program exemplifies this, Hoy-Gerlach said, providing emotional support animals for people with mental illness while placing homeless animals into permanent, loving homes.

“The human-animal bond is an underutilized resource for both human and animal well-being,” Hoy-Gerlach said.

Hoy-Gerlach’s findings also serve to push back against the idea that emotional support animals are little more than a scheme aimed at exploiting the system to give household pets special status.

“The narrative of emotional support animal fraud has unfortunately gained traction in the media and public eye, and that obscures the very real ways in which emotional support animals can benefit people,” Hoy-Gerlach said. “For the individuals in our study who are living with chronic mental illness, being paired with an appropriate animal appears to have demonstrable positive effects on their well-being.”

The project was funded by the Kenneth A. Scott Charitable Trust.