Former Rocket Sathika Ruenreong has received a sponsor’s exemption and will play in this week’s LPGA Marathon Classic. The tournament will be held Thursday through Sunday, July 14-17, at Highland Meadows Golf Club in Sylvania. 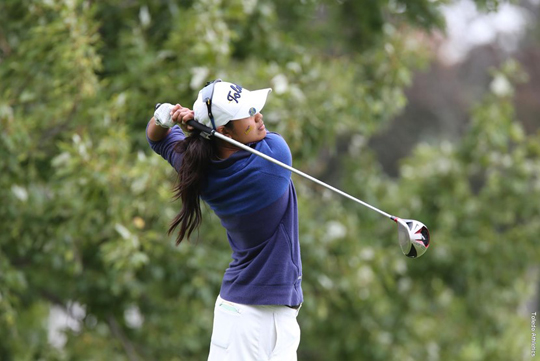 A celebration for Ruenreong’s LPGA debut will be held Wednesday, July 13, in the west concourse of Savage Arena at 5:30 p.m. Cake and refreshments will be served, and 250 free T-shirts will be handed out to fans who are encouraged to sport the shirts during the tournament to support Ruenreong. In addition, every time Ruenreong registers a birdie, Rockets fans are urged to yell “Holy Toledo!”

“I am extremely excited and I hope everyone shows up to support Sathika,” Head Women’s Golf Coach Nicole Hollingsworth said. “This will be a week she will never forget, and I want to have the largest gallery at the Marathon Classic. Let’s show the world how we support the best women’s golfer in University of Toledo history! I am going to do everything I can to make that happen. I need all the Rocket fans to show up and be part of Tiki’s team!”

A Kanchanaburi, Thailand, native who is ranked 97th in the World Amateur Golf rankings, Ruenreong set school season records for stroke average (73.83), most rounds (36), most rounds under 80 (36), and tying the record for most tourney titles (2). Ruenreong left the Rocket program as the career record holder for lowest stroke average (74.94), most rounds under 80 (122), and the co-leader for most tournament crowns (4). She also became the first Rocket ever to appear in the NCAA Regionals as she tied for 36th place out of 96 golfers at the Shoal Creek Regional in Alabama.

Ruenreong is the third UT golfer to play in an LPGA event.