Ashlie Flegel, an aerospace engineer at NASA’s Glenn Research Center, will be featured in an online talk hosted by Imagination Station Friday, July 17.

The Facebook Live event will take place at 10 a.m. 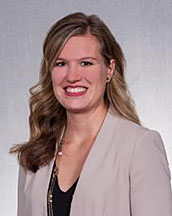 Flegel graduated from The University of Toledo in 2007 with a bachelor of science degree in mechanical engineering.

For more than a decade, she has worked in the turbomachinery field. She is researching the icing phenomenon in turbofan engines simulated in the NASA Propulsion Systems Laboratory.