Toledo Calendar Artist Excited for Art on the Mall Return

A fixture at Art on the Mall since its inception in 1992, painter Kathy Genzman has grown a sizable following at the annual event.

At a recent party, a woman went out of her way to tell Genzman that she was a big fan.

“She told me, ‘You don’t know me but I come to Art on the Mall and I have your artwork all over my house,’ ” Genzman said. “That’s so cool.” 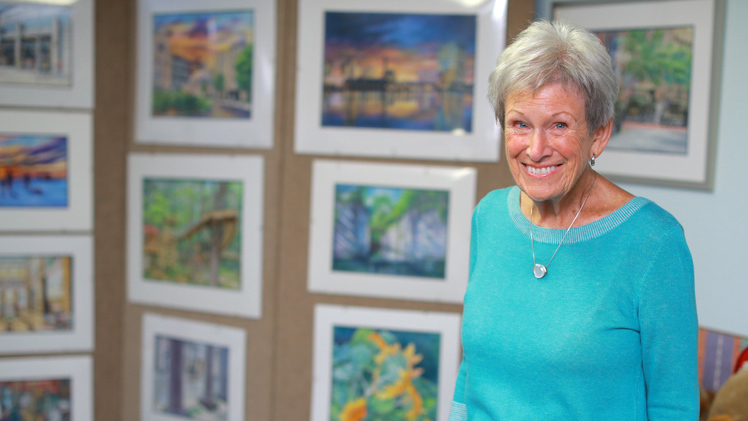 Best known for her Toledo-centric calendars, artist Kathy Genzman has had a booth at every Art on the Mall since it began in 1992.

The 80-year-old Lambertville resident, who was born and raised in Toledo and received her master’s degree from UToledo in art education, sells mostly watercolor artworks that spotlight and celebrate the unique iconography and history of her hometown in a popular calendar, as well as postcards and prints.

While she likes to vary most of her subjects from year to year, The University of Toledo is a calendar mainstay, along with the Toledo Museum of Art and the Toledo Zoo.

“UT is so cool because, I don’t care where you are, you usually see the tower,” she said. “It’s the focal point, the center of everything.”

And with the cancelation of last year’s Art on the Mall because of the pandemic, she cannot wait to sell her 2022 calendar again with the return of the University’s free, public event.

The 28th edition runs from 10 a.m. to 5 p.m. Sunday, July 25, at the Center for Alumni and Donor Engagement, 4510 Dorr St. The temporary relocation is required because of the ongoing Centennial Mall enhancement project on Main Campus.

Spotlighting nearly 100 artists from around the country in a wide range of mediums including acrylic, glass, jewelry, mixed media, pen and ink, oil, photography, pottery, textile, watercolor and woodwork, Art on the Mall will be juried by representatives from the Detroit Institute of Art.

Prizes will be given to the top artists, and UToledo’s Best of Show award will be presented to an artist who is affiliated with the University.

“I’ve participated in other artwork events before, but for years I’ve only done Art on the Mall,” she said. “It’s such a nice, university atmosphere. People come from the neighborhood, people come from all over. It’s just really neat.”

“The focal point of the show each year are the artists, like Kathy, who produce amazing work that many of us have come to enjoy,” said William Pierce, Associate Vice President of Alumni Engagement.

“Art on the Mall creates an opportunity for artists to showcase their talents which made bringing the show back this year a priority for our team.”

It was at an early age that Genzman knew she had a predilection for art – particularly drawing. So did her parents, who sent her by bus Saturday mornings to the Toledo Museum of Art for free art classes that helped inspire her career teaching art for junior high and high school students in Toledo Public Schools. She also worked at UToledo from 1998 to 2012 as an adviser and mentor to education majors during their student teaching.

Even now, after decades as an accomplished painter, Genzman said she still approaches her artwork and life as a pupil rather than as a master.

“You gotta keep learning your whole life,” she said. “I feel like everything is a learning experience.” 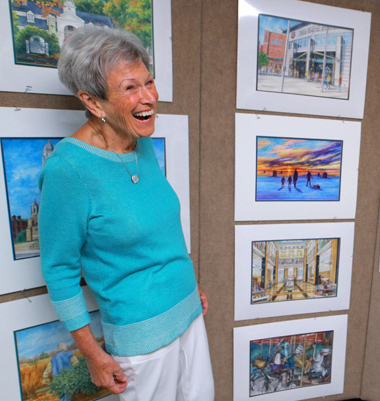 Genzman, who received her master’s in art education at UToledo, taught art at Toledo Public Schools for decades and then worked at UToledo as an adviser to education majors.

It was Genzman’s husband, Bob, who convinced her to showcase her artwork at the first Art on the Mall. He also convinced her to create the Toledo-themed paintings and calendars and was responsible for the research on important sites to recreate on the canvas.

“We kept selling more and more calendars,” she said. “At Art on the Mall I’d even make prints of them. It just became a thing. It wasn’t my idea; it was all his. I was just the drone.”

After Bob’s death in 2006, the calendar has remained a family project, with her oldest son, Paul, handling the research and writing duties, daughter Gretchen proofing the write-ups and suggestions about what to paint coming from grandchildren and nieces.

“While you’re creating something pleasing, it’s just such a joy. I’m so grateful to still be able to do it. Plus, I think it keeps me younger and makes me happy.”

In addition to the works of Genzman and other artists, Art on the Mall will feature a Young Artist Area, where budding artists can create their own artwork to take home, and also try their hand at throwing pots with the students from the UToledo Ceramics Program, who will be creating pottery on-site.

Food and non-alcoholic beverages will be available for purchase throughout the event from Big C’s Smoked Barbeque, Karen Anne’s Kettle Corn, The Petite Fleet, Opa! Gyros, K & K Concessions, Snowie Daze and Rosie’s Rolling Chef. The outdoor event will have a large seating area with umbrella tables in front of a stage featuring live jazz performances.

Art on the Mall is supported by community sponsors WTOL 11, iHeart Radio, Mail It, the Toledo-Lucas County Port Authority, Lexus of Toledo and The University of Toledo Federal Credit Union.