Potter Excited to Share Her Work at Art on the Mall

As a successful pottery artist and gallery owner, Julie Beutler has demonstrated her artistry at the potter’s wheel to patrons and strangers for nearly three decades.

And at almost every demonstration, as she molds the clay on the wheel, someone offers the same comment: “It’s just like ‘Ghost.’” 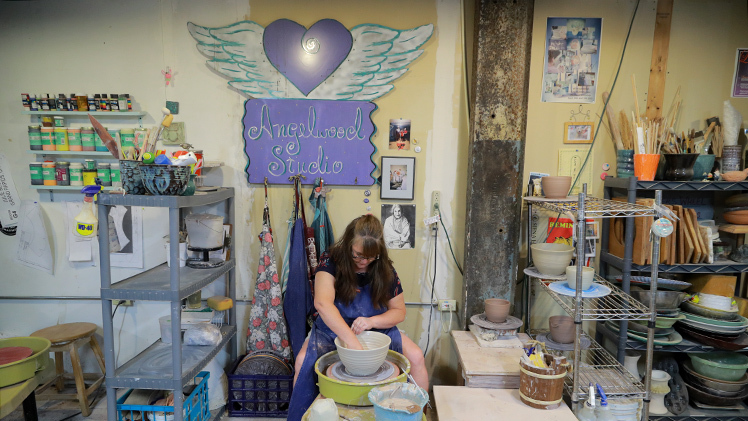 Julie Beutler demonstrates her skills on the potter’s wheel in her Angelwood Gallery in Grand Rapids, Ohio. Beutler is one of nearly 100 artists from around the country at the July 31 Art on the Mall at Centennial Mall on Main Campus.

“All these many years during live demos, I still hear that,” said Beutler, referencing the (in)famous romantic pottery scene from the 1990 romantic drama “Ghost,” in which a wife (Demi Moore) is making a clay vase on a potter’s wheel as her husband (Patrick Swayze) sits behind her, while the Righteous Brothers’ “Unchained Melody” plays on a jukebox to heighten the mood.

“I don’t know if that comment will ever die. But It’s entertaining, too, for most potters. And it opens the door to a conversation” about pottery.

Beutler is one of nearly 100 artists from around the country whose work — acrylic, glass, pen and ink, oil, mixed media, metals, photography, ceramics and jewelry — will be on display and for sale at Art on the Mall. The annual family-friendly tradition, now in its 29th year, is scheduled from 10 a.m. to 5 p.m. Sunday, July 31, at Centennial Mall on Main Campus.

“We are so excited to be back on Main Campus again,” said Ansley Abrams-Frederick, director of Alumni Programming. “We have a new layout that helps our artists and I think our guests will really enjoy as well. We’ve spread the show out a bit so we have room to grow in the future. Our hope is that our artists, guests, vendors, sponsors and volunteers enjoy Art on the Mall 2022.”

Free parking is available in lots 1N, 1S, 2, 10 and 13. A golf cart shuttle service will be available to transport guests and their packages to and from their vehicles.

“I cannot say enough good things about Art on the Mall,” Beutler said. “As an artist, to have a one-day show that’s easy to get in and get out of, that’s fabulous and I do very well. It’s such an easy show. I’m glad that I became part of it, and I get excited to participate.” 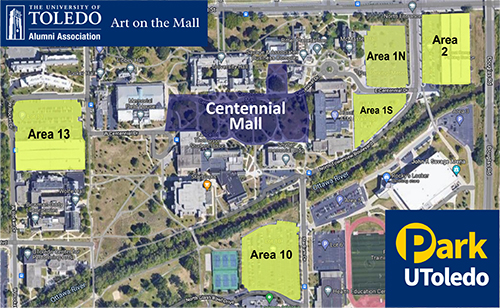 A map of free on-campus parking for Art on the Mall.

Beutler, who has had a presence at Art on the Mall since 2015, will be in Booth 22, just outside Memorial Field House. She plans to have a wide variety of her ceramics for sale, with a price range from $8 to $100.

“I’m a strong believer in artwork being affordable,” she said. “I’ll have little kids buy my work — a mug and then they drink out of my mugs. Nothing thrills me more than thinking about someone somewhere in the world who is drinking from a mug or eating from a bowl I made.

“That’s what’s always attracted me to pottery,” she added. “The idea that my works are being shared with people and they’re enjoying it.”

Born and raised in Michigan, Beutler was certain while in high school that she would be a painter. And painting was her initial focus as a fine arts major at Siena Heights University in Adrian, Mich.

“Then I took a ceramics course,” she said. “It was a clay course and I’m not exaggerating when I say that only three days into it, I realized I was concentrating on the wrong thing. I’ve been very passionate about pottery and never looked back.”

After graduating, Beutler moved to Grand Rapids, Ohio, in 1993 and opened Angelwood Gallery, where she creates and sells her own work as well as pottery by former students and watercolor, mixed media and woodwork by other regional artists.

“It’s work that complements the pottery,” she said.

Pottery, Beutler said, is a more complex art form than many of us think it is. In fact, it’s downright magical.

“I literally could sit someone down and I could show them to how make a little pot and it would just take them just a few minutes to make. Pottery can be very simple and that’s the magic of it, but also that it can be much more complex, like learning the potter’s wheel or creating more complex shapes or glazes” to apply to the shaped works.

She has also found that this art has a way of taxing her in ways that are beyond an artist’s creativity. For example, knowing how to change the wiring in a kiln or a breaker when a kiln has blown a fuse, how to clean out a sink that’s clogged with clay or even the mathematical formulas needed to precisely size an art piece.

“I am a jack of all trades, master of just one,” she said. “While I may not be a master of electricity, I know my pottery pretty well.”

As for the upcoming Art on the Mall, Beutler said she is looking forward to engaging with her artist neighbors, customers and those who just happen to wander into her booth.

“That’s what I like about the show, being able to interact with everyone,” she said. “It’s a good day to be out and to enjoy Toledo and the campus and to meet new customers. It’s just a fun day.”

In addition to the artists and their artwork, Art on the Mall will offer activities and entertainment throughout the day, including a young artist area for children and live music. Dining options will include Big C’s Barbeque, Karen Ann’s Kettle Korn, K and K Funnel Cakes, Rosie’s Rolling Chef, Snowie Daze and The Petite Fleet.

Representatives from the Detroit Institute of Arts will jury the artists’ work. Prizes will be given to the top artists, and UToledo’s Best of Show award will be presented to an artist who is affiliated with the University.

Art on the Mall is supported by community sponsors WTOL 11, iHeart Radio, Mail It, the Toledo-Lucas County Port Authority, Lexus of Toledo and The University of Toledo Federal Credit Union.