The University of Toledo is continuing its Dialogues on Diversity series with a conversation on the role of Black women and non-Black allies in movements toward equity in the U.S. 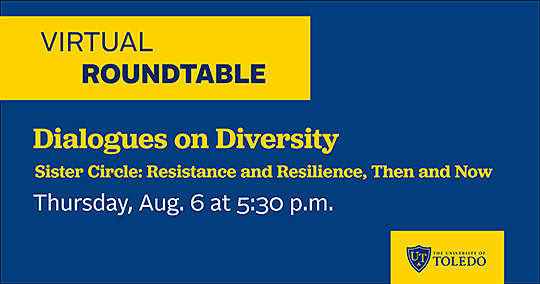 The discussion to be moderated by Malaika Bell, program manager in the UToledo Office of Diversity and Inclusion, is an invitation for the public to join a meeting of the Sister Circle, a group of diverse women from both Main Campus and Health Science Campus who have been meeting weekly for the past several months to promote positivity.

“During our next meeting of the Sister Circle, we invite the community to participate in a conversation about the role that Black women have played in movements toward equity in our nation, how we can truly practice radical self-care, and what we want from our non-Black allies,” Bell said.

• Charlene Gilbert, dean of the UToledo College of Arts and Letters;

This is the fifth in a series of recent virtual Dialogues on Diversity in the more than two months since George Floyd was killed in Minneapolis when a police officer knelt on his neck for nearly nine minutes, sparking protests against systemic racism across the country.