The University of Toledo College of Law is hosting a virtual event featuring a national expert on racial profiling after the killing of George Floyd by a Minneapolis police officer in May and the police shooting of Jacob Blake in Kenosha last month.

David A. Harris, the Sally Ann Semenko Chair and professor of law at the University of Pittsburgh School of Law, will deliver a lecture titled “Police/Civilian Confrontations and Deaths: How Often? Why? What Can We Do?” from 11:50 a.m. to 1 p.m. Friday, Sept. 11 on Webex. Registration is required for the free, public event on the College of Law website.

“We are delighted to host Professor Harris to help us grapple with these difficult issues,” said Rob Salem, associate dean for diversity and inclusion and clinical professor of law at the UToledo College of Law. “We all have a responsibility to listen carefully and engage affirmatively in anti-racist efforts.” 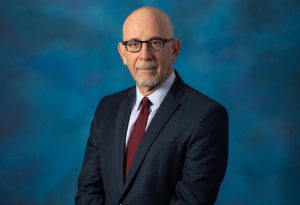 Harris taught at the UToledo College of Law from 1990 to 2007, where he was the Eugene N. Balk Professor of Law and Values.

For more than two decades, Harris has been the nation’s foremost expert on racial profiling. His research and publications became the basis for the first proposals in Congress to curb racial profiling and led to laws and regulations against profiling in more than half the states and hundreds of police departments.

Harris frequently works with national, state and local governments and non-governmental organizations across the country to improve the quality of police work, with a special emphasis on bridging the gap between police and the communities they serve.

He is the creator and host of the “Criminal Injustice” podcast, which is devoted to issues in the criminal justice system. Harris also is the author of several books, including “A City Divided: Race, Fear, and the Law in Police Confrontations,” which was published by Anthem Press in 2020.

In 2015, Harris received the Jefferson Award for Public Service for his work in Pittsburgh and other communities across the country to create better relationships between police and the communities they serve, particularly Black communities, to bring about both respectful, just policing and public safety.