For more than two decades, UToledo students, faculty, staff and the Toledo community have joined together annually in a celebration of the right to read and think freely. 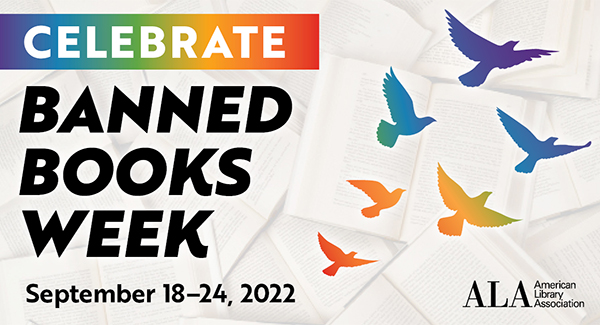 “In 2021, book banning incidents increased and state legislatures spread across the country wrote laws to prevent libraries and bookstores from giving people access to controversial novels,” Kilmer said. “Over the past quarter of a century, a legion of speakers has shown us the ways that censorship threatens our personal freedom and our democracy.”

The American Library Association’s Banned Books Week, which was launched in 1982, inspired UToledo’s celebration. The ALA sets aside a week to reflect on the power of books and reading to inspire, educate and challenge us, she said.

In that year, a record number of books, including classics like John Steinbeck’s “Of Mice and Men” and Harper Lee’s “To Kill a Mockingbird,” were banned. As time passed, LBGTQ+ and race motivated many challenges. For example, these recent titles are frequently restricted: Alex Gino’s “Melissa’s Story (George),” which focuses on a transgender girl, and Angie Thomas’ “The Hate U Give,” about a 16-year-old Black girl who sees a white police officer fatally shoot her best friend during a traffic stop.

“The dictionary, all the holy books, and “Winnie the Pooh” were banned because they offended someone,” Kilmer said. “A library that offends nobody will consist of empty shelves because pleasing everyone is impossible.

The celebration begins at 9 a.m. in the Health and Human Services Multipurpose Room 1711B, with a welcome from Dr. Ben Myers, Department of Communication chair.

This year’s program features these presenters:

•  4 p.m. — “Reading and Writing in Prison from the Inside Out and the Outside In,” Dr. Renee Heberle, professor of political science, co-director of the Program in Law and Social Thought and coordinator of the Inside/Out Prison Exchange Project.

Free books, door prizes and light refreshments will be offered all day, as well as extra credit vouchers for classes.

“It’s the best day of the year,” Kilmer said. “We laugh a lot, and yet, the speakers raise our awareness of the shadow censorship casts over free expression. They show us how reading expands our horizons and kindles empathy, inspiring us to make the world a better place.”

“Derek Wilmott and Saadia Farooq organized our trivia match, and we think it’s a great fun way to end our 25th year,” Kilmer added. “We will give a few books and some door prizes. We also offer Smarties candy, which is appropriate for a game requiring thinking.”