Senior quarterback Mitchell Guadagni threw for two touchdowns and ran for two more to lead Toledo (4-1, 1-0 Mid-American Conference) to a 31-24 victory over Western Michigan (3-3, 1-1 MAC) before a Homecoming crowd of 22,141 at the Glass Bowl Saturday.

For the third straight week, the outcome of Toledo’s victory was not settled until the game’s final possession. Clinging to a 31-24 edge, the Rockets stopped the Broncos on fourth-and-22 from the UToledo 24-yard line when WMU quarterback Jon Wassink was tackled two yards shy of the first down by sophomore linebacker Saeed Holt with 1:44 left. Toledo was able to get a pair of first downs on runs by sophomore Bryant Koback to run out the clock and claim the victory. 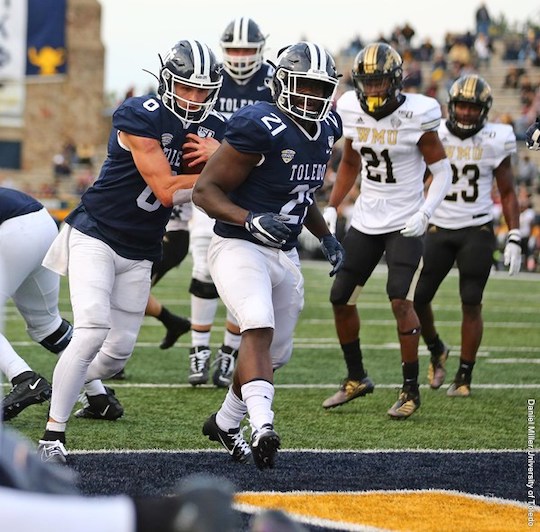 Shakif Seymour led the way for Mitchell Guadagni in what would stand up as
the decisive touchdown in Toledo’s 31-24 win over Western Michigan.

“It was a solid team win over a really good team,” said Head Coach Jason Candle. “They were the best team we’ve played so far in a lot of ways. They gave us a hell of a fight today and had a good plan defensively. I thought our guys did a good job of hanging in there and fighting in tough situations and picking up some tough yards when we needed it. We also got some key stops on defense. There were a lot of ebbs and flows in the game with turnovers and a lot of ups and downs. We just found a way to keep playing and answering the bell when we need to.”

Guadagni completed 14 of 22 passes for 200 yards and two scores. Junior Bryce Mitchell paced the Rockets with four catches for a career-high 119 yards. Sophomore Bryant Koback led the rushing attack with 177 yards on 21 attempts. 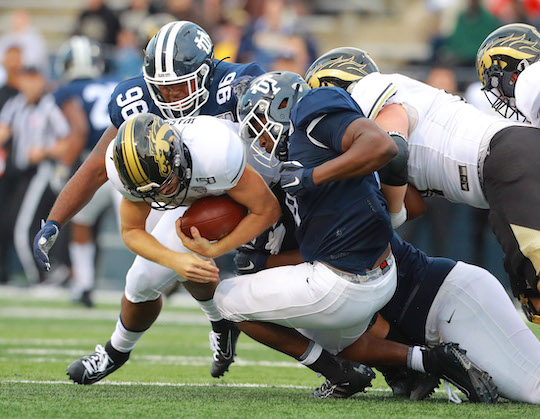 The defense came up big for the Rockets to seal the victory.

The defense was led by Holt, who tied his career high with 12 tackles and a key sack at the end of the game; junior cornerback Samuel Womack, who had four tackles and broke up three passes; and senior defensive tackle Nate Childress, who blocked a field-goal attempt and batted down two passes. The Rockets held Wassink to under 50 percent passing (25 of 51) and held the Bronco offense to 7 of 18 on third down.

In the first quarter, Toledo came out on fire, scoring on its first two possessions and putting Western in a 14-0 hole. Mitchell opened the scoring with a leaping 38-yard touchdown catch from Guadagni. After a three-and-out by the Broncos, Guadagni drove the Rockets 50 yards in 10 plays, capped by a shovel pass to Devin Maddox for a five-yard touchdown. 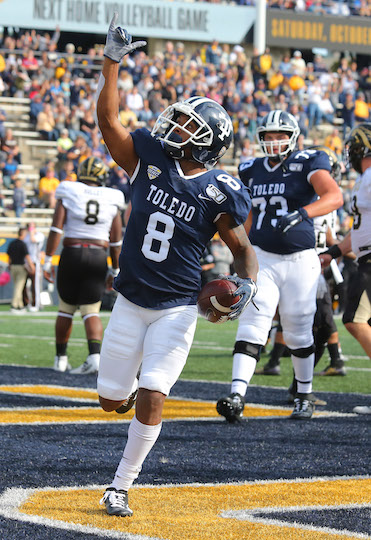 WMU answered with a six-yard TD pass from Wassink to Giovanni Ricci, capping off an 11-play, 75-yard drive to cut the score to 14-7.

Toledo extended its lead to 21-7 on a two-yard TD run by Guadagni that capped a nine-play, 76-yard drive at the 7:24 mark of the second quarter. A 22-yard field goal by Evan Davis padded the lead to 24-7 with a little more than two minutes to play in the half. Davis also missed a 43-yarder on the last play of the half.

WMU struck first in the third quarter when Wassink connected with Jaylen Hall for a 43-yard touchdown bomb to cut the margin to 24-14. The Rocket lead was further trimmed to 24-17 when Thiago Capps connected on a 34-yard field goal with 29 seconds left in the quarter.

In the fourth quarter, Guadagni engineered another long drive, this time taking the Rockets 74 yards in 13 plays. He finished off the drive himself, going one yard for the score to make it 31-17.

WMU came back quickly, however, as LeVante Bellamy busted loose for a 39-yard TD run to pull the Broncos to within a score with 7:56 to play. After Toledo went three-and-out, WMU drove to the Toledo 12-yard line with just over two minutes to play. But Wassink was sacked by Holt for a 12-yard loss, setting up a fourth-and-24 situation. Wassink scrambled and was tackled two yards shy of the first down by Holt with 1:44 left. Toledo was able to get a pair of first downs on runs by Koback to run out the clock and claim the victory.

Up next, the Rockets will hit the road next Saturday for a contest at Bowling Green in the annual Battle of I-75 rivalry game.