The University of Toledo Varsity ‘T’ Hall of Fame will induct six former student-athletes Friday, Oct. 25, at the Hilton Garden Inn in Perrysburg.

Social hour for the event will begin at 6 p.m., and dinner will follow at 7 p.m. The class also will be introduced at halftime of the Rockets’ football game vs. Eastern Michigan Saturday, Oct. 26. 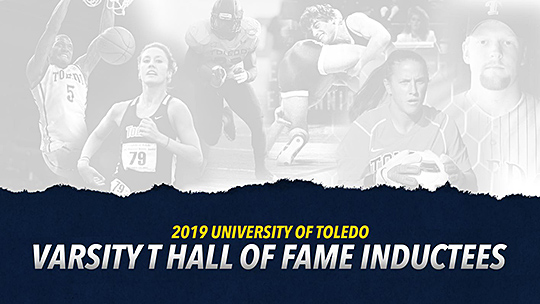 Tickets for the Varsity ‘T’ Hall of Fame induction dinner are $45 or $360 for a table of eight and can be purchased by calling the Athletic Development Office at 419.530.5087.

David Fluellen, football, 2010 to 2013. He was a two-time, first-team All-Mid-American Conference selection at running back in 2012 and 2013, and ranks sixth in UToledo history with 3,336 career rushing yards. He ranks third in career yards per carry (5.95) behind Kareem Hunt and Adonis Thomas. Four times he rushed for more than 200 yards in a game, tying Chester Taylor and Hunt for the most 200-yard efforts in school history. Fluellen was a backup to Thomas in his first two seasons at Toledo, gaining 224 and 493 yards in those two years, respectively. As a junior, Fluellen busted loose for 1,498 yards, which ranked eighth in the nation that season and sixth all-time at the University; he would have had even more yards, but he sat out one game and parts of two other contests due to injuries. Fluellen had a string of six straight games over 100 yards, averaging 182.4 yards per game during that span. He was named first-team All-MAC and one of 10 national semifinalists for the Doak Walker Award as the country’s best running back. As a senior, Fluellen rushed for 1,121 yards despite missing three games and most of a fourth due to a late-season leg injury. He led the MAC with an average of 6.7 yards per carry and was 10th in the nation with an average of 124.6 rushing yards per contest. In one game vs. Western Michigan, Fluellen ran for 220 yards and four TDs. After graduation, Fluellen signed with numerous NFL teams, playing on practice squads until making his game debut in 2017 with Tennessee; he has played for the Titans ever since.

Jeremy Griffiths, baseball, 1997 to 1999. He was a three-year letter winner, earning first-team All-MAC and MAC Pitcher of the Year honors as a junior in 1999. Griffiths was dominant that season, compiling an 11-4 mark with a 2.50 ERA and a school-record 102 strikeouts. He set the UToledo record with 11 complete games in his 15 starts, racking up 97.2 innings and throwing three shutouts. Griffiths, whose 11 wins ranks second all-time at Toledo, helped the Rockets to a 39-20 record (23-9 MAC), the most wins in school history. Griffiths came on the scene as a freshman in 1997, going 2-1 with four saves out of the bullpen with a team-best 3.56 ERA and 32 strikeouts in 30.1 innings pitched. As a sophomore, Griffiths moved into the starting rotation, going 5-3 and striking out 51 batters in 54.2 innings. He once again led the team with a 4.94 ERA. Griffiths left UToledo after his junior season and was drafted in the third round by the New York Mets. He pitched for the Mets in 2003 and the Houston Astros in 2004.

Emma Kertesz, women’s track and field/cross country, 2008 to 2012. A two-time All-MAC selection in track and cross country, Kertesz won four MAC titles, as well as earned All-America honors in the 10,000 meters in her career as a Rocket. As a senior in 2012, Kertesz was named Most Valuable Performer at both the MAC Indoor and Outdoor Championship meets. In the indoor meet, she won the mile, breaking the school record and MAC Championship meet record at the time, while also winning the 5,000 meters and placing third in the 3,000. Her performance helped lead Toledo to a second-place showing, its highest-ever finish at the indoor championship. In the outdoor meet, Kertesz won the steeplechase and the 5,000, again leading Toledo to a best-ever second-place finish. She earned second-team All-America honors in the 10,000 with a 16th-place finish in the 10,000 meters at the 2012 NCAA Championship Meet, and broke the MAC record in the 10,000 with a time of 33:28.58 that she set at the Stanford Invitational. As a junior, Kertesz earned second-team All-MAC with a heroic performance at the MAC Outdoor Championship. Poor weather forced her to run three distance events in one day, and she came through for the Rockets, taking second in the steeplechase, fourth in the 5,000 and fifth in the 1,500. In cross country, Kertesz helped lead Toledo to back-to-back MAC Championships in 2010 and 2011, earning all-conference and all-region honors both years. In 2011, she was runner-up at the MAC Championships and seventh at the NCAA Regionals as Toledo took third as a team. Her performance helped the Rockets qualify for the NCAA Championships, where they had their best finish in school history (21st). In 2010, Kertesz finished eighth at the conference championships and 19th at the NCAA Regionals, helping Toledo qualify for the NCAA Championships. In 2012, she represented Team USA in the Chiba Ekiden Relay in Japan and finished 12th at the USA 5K Road Championships. She qualified for the 2016 and 2020 Olympic Marathon Trials. Kertesz is the school record holder in the 10,000 and ranks in the top 10 in the 1,500, steeplechase and 5,000.

Jade Montrie, wrestling, 1987 to 1991. Montrie was a three-time Mid-American Conference Champion in 1988, 1989 and 1991, all at the 134-pound weight class. He also was a three-time NCAA qualifier. He was a team captain in 1989 and 1991, and was ranked in the top 10 nationally both seasons. Montrie participated in the University World Freestyle Tournament in 1990 in Czechoslovakia and the World Duals Tournament. After graduation, Montrie became a graduate assistant coach at Toledo from 1992 to 1994, then coached for the Michigan National Team, then became the head technique coach of the Michigan Junior Olympic Team. He also held a position as assistant wrestling coach at Bedford High School in Michigan.

Rian Pearson, men’s basketball, 2011 to 2014. Pearson was a three-time All-MAC selection from 2011 to 14, leading Toledo in scoring all three seasons. He was the first Rocket to earn all-league honors in three straight seasons since Greg Stempin (1998 to 2001). Among Rockets who played three seasons, Pearson ranks second in career points with 1,589, trailing only Steve Mix. As a senior, Pearson was named second-team All-MAC and National Association of Basketball Coaches All-District while helping the Rockets to a school-record 27 victories (27-7) and a share of the MAC regular-season title. He was eighth in the MAC with 14.6 points per game while shooting a career-best 47.9 percent from the floor. He also was sixth in the MAC in steals (1.7 steals per game) and second on the team with 5.3 rebounds per contest. As a junior, Pearson was third in the MAC with a 17.9 scoring average, gaining first-team all-conference accolades. He also ranked in the top 10 in the MAC in steals (1.7/sixth) and rebounds (6.8/eighth). After sitting out the 2010-11 season following his transfer from the University of Wisconsin-Green Bay, Pearson was second in the MAC with 16.4 points per game, just fractions of a point behind Julian Mavunga of Miami. Pearson, a second-team All-MAC selection, also ranked third in the MAC and fifth in the nation among guards with 8.3 rebounds per game that season. After graduation, Pearson played professional basketball for three seasons.