The Eagles took the lead in overtime, 34-31, on a 24-yard field goal by Chad Ryland. Toledo was faced with third-and-10 from the 15-yard line when Peters hit Rosi on a corner route to send the Rockets into a wild celebration. 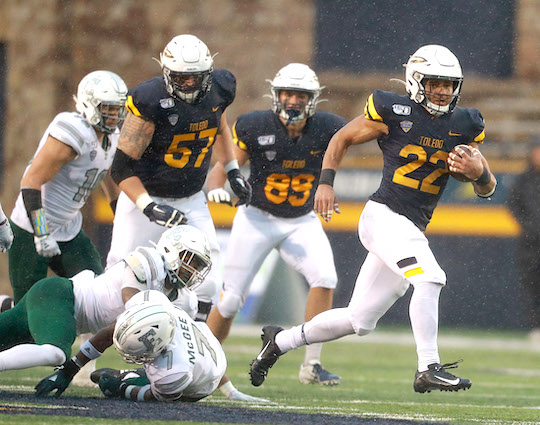 Bryant Koback rushed for a career-high 259 yards in Toledo’s 37-34 overtime win over Eastern Michigan Saturday in the Glass Bowl.

Sophomore running back Bryant Koback led the Rocket offense with a career-high 259 yards and two touchdowns. Peters, starting his first game of the season in place of injured quarterbacks Mitchell Guadagni and Carter Bradley, completed 9 of 18 passes for 138 and two touchdowns. Junior Shakif Seymour added 94 yards rushing as Toledo racked up 504 yards of total offense, 366 on the ground. 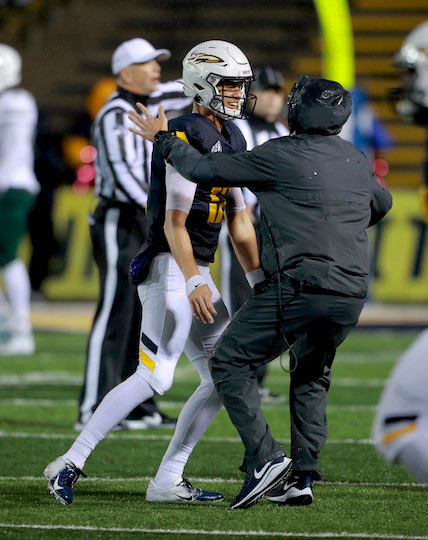 Toledo jumped on the board first on their opening drive, scoring on a five-yard run by Koback that capped a 15-play, 67-yard drive.

Later in the first quarter, the Rockets missed a chance to add to their lead when Koback lost the ball at the pylon on an attempted dive into the end zone, resulting in a touchback for EMU.

EMU cut the lead to 10-7 on a one-armed touchdown grab by Arthur Jackson from Mike Glass from 24 yards out. On their next possession the Eagles tied the score on a 29-yard field from Chad Ryland.

Toledo wasted no time to start the second half, moving 44 yards in three plays to a take a 16-10 lead. Ronnie Jones set up the drive with a 48-yard kickoff return. Seymour finished the drive with a seven-yard run. The extra point was no good due to a bobbled snap.

The Rockets added to their lead on a 19-yard TD pass from Peters to Bryce Mitchell. Peters hooked up with Rosi for the two-point conversion to make the score 24-10. 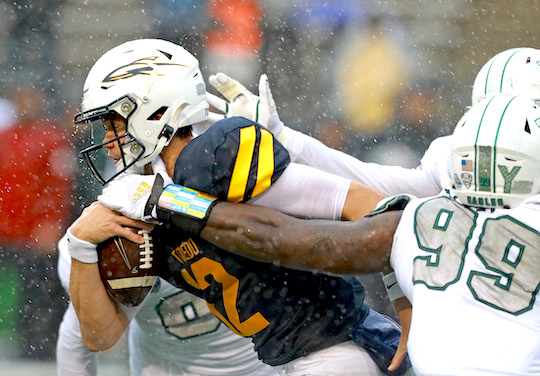 Eli Peters threw for 138 and two touchdowns in the dramatic overtime victory.

EMU came back with an 11-play drive that was capped by a four-yard rushing TD by Glass. The Eagles went for two points on the conversion, but the pass attempt fell incomplete, making the score 31-16.

In the fourth quarter, EMU cut the lead to 31-24 on a three-yard TD and a two-point conversion run by Vann. With 8:18 to play. Vann scored again on a 26-yard TD run to tie the score with 2:35 left. The Eagles recovered a Toledo fumble and had a chance to win it in regulation, but Ryland’s 33-yard attempt sailed wide right with 1:03 to play.

In overtime, the Eagles took possession first and grabbed a 34-31 lead on a 24-yard field goal by Ryland.

Toledo was faced with third-and-10 from the 15-yard line when Peters hit Rosi on a corner route to send the Rockets into a wild celebration.

Up next, the Rockets host Kent State Tuesday, Nov. 5. Kickoff time will be announced soon.