Rocket Football is back.

The other five games are all against MAC West Division opponents. The Rockets travel on consecutive Wednesdays to Western Michigan on Nov. 11 and Eastern Michigan on Nov. 18 before finishing with three Saturday contests against Ball State on Nov. 28, at Northern Illinois on Dec. 5 and Central Michigan on Dec. 12. The MAC Championship Game will be played on Friday, Dec. 18, at Ford Field in Detroit. 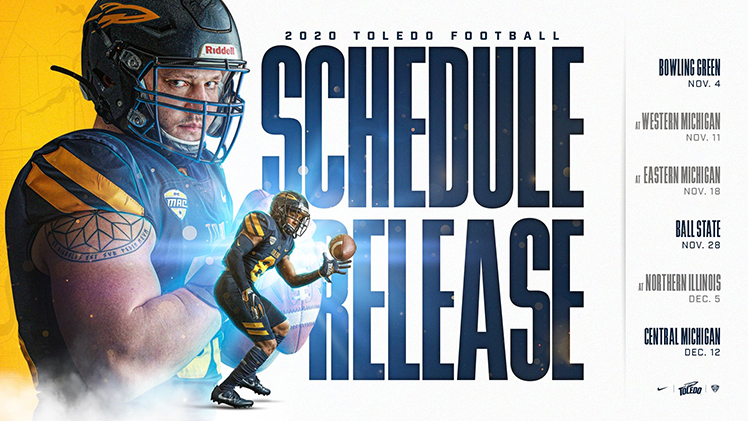 Rocket Football kicks off on Wednesday, Nov. 4, with the home opener against rival Bowling Green. The six-game schedule features Mid-American Conference teams and runs through December. Each of the Rockets’ games will be broadcast for fans to watch.

The Mid-American Conference previously announced there will be no general public attendance at any MAC football games this season due to safety concerns related to the coronavirus pandemic.

Each of the Rockets’ games will be broadcast for fans to watch.

The annual “Battle of I-75” matchup kicks off at 8 p.m. on ESPNU, and the game at Western Michigan starts at 8 p.m. and can be seen on ESPN2. Kickoff times and broadcast information for the remaining games on Toledo’s schedule will be announced at a later date.

While football fans are not allowed inside the Glass Bowl this season, University of Toledo Athletics and Dave White Chevrolet have teamed up to give Rockets’ supporters the opportunity to be at the home games in spirit through the new fan cutout program.

Fans can submit a photo of themselves, a family member, a friend or a pet to virtually “sit” in the Glass Bowl. Cutouts will be placed in the endzone (section 14) and prize packs will be awarded any time a cutout is hit by an extra point or field goal.

To secure a personalized Rockets fan cutout go to utrockets.com/fancutouts.

Orders must be placed by Wednesday, Oct. 28, to ensure the cutouts are in the stands for the season opener against Bowling Green. Any cutouts submitted after that deadline will be installed prior to the next home game.

Net proceeds will benefit the Rocket Fund, which supports the mission of funding UToledo student-athlete scholarships and other expenses. More information can be found at the Support UT Rockets website.