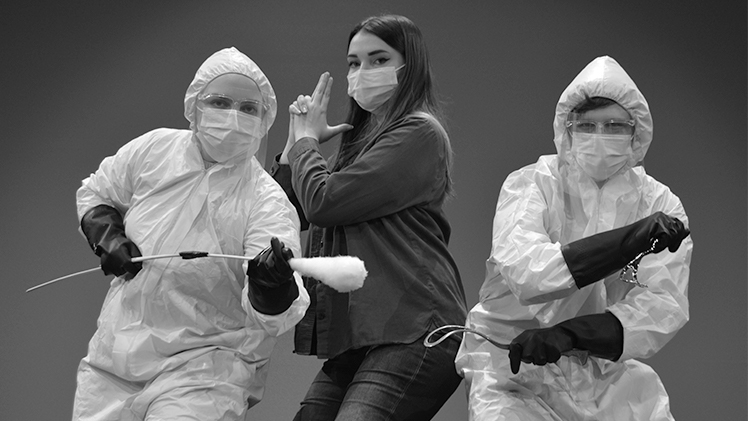 “Year of the Living Dead” is a throwback tribute to the B-horror films of the drive-in era of the 1950s and early 1960s. The film was created under strict COVID safety protocols, and stars a talented cast of UToledo students under Lingan’s direction, with the assistance of film alum Jarrett Cunningham as cinematographer and editor.

The story concerns the tribulations of several human beings dealing with a viral pandemic that is transforming the population of earth into flesh-eating zombies. A pair of scientists — Dr. Eve Eaves (Emily Damschroder) and Dr. Reginald Greeley (Dillon Sickels) — desperately attempt to contact advanced alien civilizations in a plea for assistance in stopping the zombies and curing the virus.

Meanwhile, the conspiracy theory-obsessed group known as “Militia Z” stockpiles weapons in the belief that the zombie virus is a fiction created by the government and the Reptilian Illuminati to control the minds and bodies of the ignorant, unarmed masses.

Will the zombies be defeated, or will they consume humanity? Will the virus be proven a hoax? Will aliens come to earth and save humanity from certain death? You will have to see “Year of the Living Dead” to learn the truth.

“Year of the Living Dead” is recommended for ages 13 and older due to graphic zombie gore. Screening dates are Friday, Oct. 29, at 7:30 p.m. and Saturday and Sunday, Oct. 30 and 31, at 2 p.m. There also will be a special midnight screening on Oct. 30 — zombie costumes encouraged. All screenings will be in the Center Theatre of the UToledo Center for Performing Arts.

Admission is free. For more information, visit the Department of Theatre and Film’s events page.