Kickoff is set for 7 p.m.; the game will be carried by the CBS Sports Network. 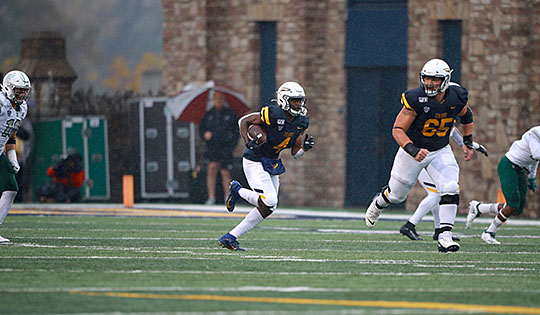 Junior wide receiver Danzel McKinley-Lewis is ninth in the nation in yards per reception (21.8).

The Rockets are tied with Northern Illinois for fourth place in the MAC West Division, a half-game behind Western Michigan and Central Michigan (3-2) and a full game behind Ball State (3-1). The Golden Flashes are tied for third with Buffalo in the East, a game behind division leaders Ohio and Miami (3-1). A loss to either Toledo or Kent State would put their division title hopes in serious jeopardy.

The Rockets are coming off a 37-34 overtime victory over Eastern Michigan Oct. 26. Junior quarterback Eli Peters hit junior tight end Drew Rosi for a 15-yard touchdown in overtime to seal the win for Toledo. The Eagles took the lead in overtime, 34-31, on a 24-yard field goal by Chad Ryland. Toledo was faced with third-and-10 from the 15-yard line when Peters hit Rosi on a corner route to send the Rockets into a wild celebration.

The Rockets were playing without senior quarterback Mitchell Guadagni, who was injured at Bowling Green Oct. 12, and redshirt freshman Carter Bradley, who was the starter and was injured at Ball State Oct. 19. The status of Guadagni and Bradley for the Kent State game has not been announced.

Kent State is coming off a 23-16 home loss to Miami last week. The Golden Flashes opened the MAC season with wins over Bowling Green and Akron before falling to Ohio, 45-38, Oct. 19. They are led by junior dual-threat quarterback Dustin Crum, who has compiled 1,345 yards passing and 374 yards rushing.

Toledo leads the series with Kent State, 26-21. The Rockets have won the last four meetings, most recently a 56-34 victory at Kent State in 2018. Toledo is 5-1 vs. the Golden Flashes since the MAC split into divisions in 1997. This year’s game will be only the seventh meeting between the two schools in the past 25 years.