The Midnight Blue and Gold will tangle with 2018 NCAA Champion Notre Dame (35-4, 14-2 Atlantic Coast Conference) for the fourth time in the last five years. A season ago, the Rockets drew 6,059 fans for their home matchup against UND, the third largest crowd in school history. 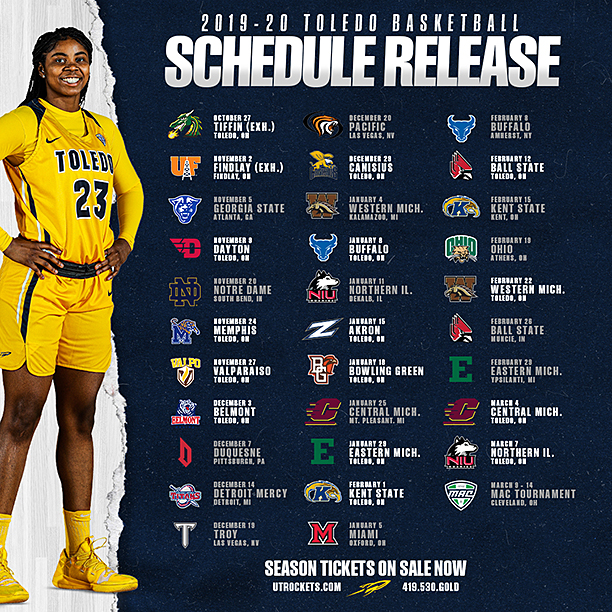 “To reach your potential as a team, you have to challenge yourself against the best,” said Head Coach Tricia Cullop, who ranks sixth in league history in overall winning percentage (241-123, .662) and 10th in conference winning percentage (127-61, .676). “Playing Notre Dame has made us better. When you play a team of their caliber, you have to bring a sustained and focused effort.”

Additional highlights for Toledo’s non-league slate are five games against squads that competed in the 2019 postseason.

“Our goal every season is to play in the postseason,” Cullop said. “These five games will give us a chance to improve before MAC play and earn an opportunity to play in postseason.”

Toledo has been outstanding at home under Cullop, compiling a stout 137-40 (.774) ledger. The Rockets have won at least 11 home contests in nine of 11 seasons, including a school-record 19 victories during the 2010-11 campaign.

“We are so grateful for the amazing atmosphere our fans provide in Savage Arena,” Cullop said. “We’ve been top 30 in the country in attendance seven out of the last eight years.”

Toledo also will battle Postseason WNIT participants Troy (22-9, 13-5 Sun Belt) and Pacific (19-13, 10-8 West Coast) as part of the Las Vegas Holiday Hoops Classic Dec. 19-20 at the South Point Hotel & Casino. The Rockets, who will compete against both the Trojans and Tigers for the first time in program history, will venture to Sin City for the first time since the 1995-96 season.

“We’re excited to travel to Las Vegas to play two strong mid-major programs in Troy and Pacific,” said Cullop, whose team is averaging a MAC-best 21.9 wins over the last 11 seasons. “In addition to playing competitive teams, it’s a great chance to show our players a part of the country that many of them have only seen in pictures.”

The Rockets’ season will officially tip off at Georgia State Nov. 5. Toledo will tangle with Dayton in its home opener, followed by a matchup at Notre Dame 11 days later.

A three-game homestand will begin against Memphis Nov. 24, Valparaiso Nov. 27 and Belmont Dec. 3. Toledo defeated all three opponents a season ago on the road, claiming a 58-48 victory against the Tigers, a 65-59 triumph vs. the Crusaders and a 78-69 win against the Bruins.

Toledo then will embark on a four-game road swing with the first stop at Duquesne (19-13, 11-5 Atlantic 10) Dec. 7. A season ago, the Rockets registered an impressive 65-52 home victory over the Dukes.

The women’s team also will face Detroit Mercy Dec. 14. The Rockets will wrap up the non-league slate with a home contest against Canisius Dec. 29.

The Rockets are slated to return nine letter winners in 2019-20; these include three starters from last year’s squad that posted a 21-12 overall record and an 11-7 ledger in the MAC.

The Rockets, who finished second in the MAC West Division standings, made their 12th overall appearance in the 2019 Postseason WNIT and seventh under Cullop. Toledo defeated Big East member Seton Hall, 71-65, in the first round before falling at eventual tourney finalist and Big Ten foe Northwestern, 54-47, in the second round.