As one of the award’s dozen honorees, Kucharewski, director of the UToledo Recreation Therapy Program, said she was honored to be in the company of her peers. 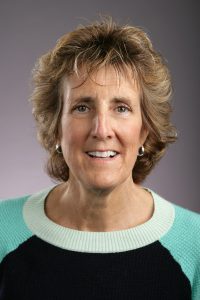 “Professionally, it means I’m doing my job and making a difference,” she said. “Personally, I consider myself blessed to be able to have a job I absolutely love.

“It’s just a good feeling,” Kucharewski added. “It’s the satisfaction of knowing I help people every day in and outside of the classroom.”

“I work with prospective students, current students, alumni and at-risk youth in NYSP,” she said. “I work to help everyone I encounter achieve the greatest degree of success in whatever they are doing. I went into teaching so that I could educate and mentor others as people have done for me.”

It was through NYSP that Kucharewski said she helped a first-generation college student who had “veered off the right path.”

“He was a talented athlete who had difficulty with the rigors in the classroom and rules, but he had to abide by the NYSP rules so that he would be a good role model for the kids,” she said. “I saw him transform; the kids adored him and they could relate to them, and he constantly gave back to the kids.”

That student worked at the NYSP camp for several summers and became a group leader. He later received bachelor’s and master’s degrees and is pursuing his doctoral degree.

“He is still in touch with me,” Kucharewski said. “I have no doubt that he will end up getting that degree. All he needed was someone to make him be accountable in the classroom, channel and develop his leadership skills, test his commitment and, most importantly, believe in him.”

Just as she’s tried to make a difference in the lives of her students, Kucharewski said she had a mentor who made a difference in her life: Margaret “Peg” Traband, who retired in 2018 as senior vice provost of academic affairs.

“Peg Traband was my dean when I was a chair. She was the consummate professional: levelheaded, compassionate, knowledgeable, provided institutional memory, and was always helpful and accessible,” Kucharewski said. “Peg always looked at things from a student’s perspective, the student always came first. Everyone should have a Peg as a mentor.”

Kucharewski has received numerous awards including Recreation Educator of the Year and the DiAnne Masztak Award for supporting online learning in a distinguished fashion and for her commitment to online teaching.