Junior Shakif Seymour rushed for a career-high 175 yards and two touchdowns to lead Toledo to a hard-fought 35-33 triumph over Kent State Tuesday night in the Glass Bowl.

Seymour, taking over as the Rockets’ main running option due to a first-half injury to sophomore Bryant Koback, gained 40 yards and two first downs in Toledo’s final possession as the Rockets ran out the clock and held on to the victory. 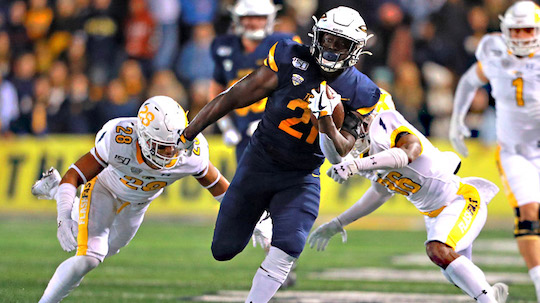 With the win, Toledo (6-3, 3-2 Mid-American Conference) gained bowl eligibility, but, more importantly, stayed in the hunt in the MAC West Division. The Rockets are a half-game behind Western Michigan and Central Michigan (4-2) and tied with Ball State (3-2).

“Conference wins are tough to get in November,” said Head Coach Jason Candle. “Everybody wants to be playing meaningful games in November and that’s where we’re at. We played a much-improved team tonight and it was a gritty performance from our guys. I’m really proud of their effort. 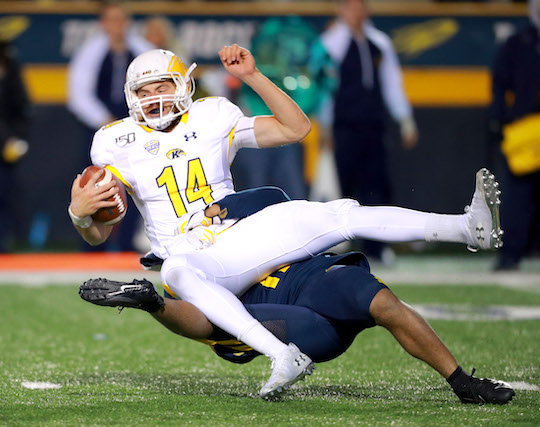 The Rocket defense made it difficult for Kent State quarterback Dustin Crum.

“We have a very young football team, and it can be really hard to predict what’s going to happen. I trust the leadership and makeup of our players, we recruit guys who are winners. Pride is a tough thing, it can be a slippery slope. It can bite you or it can propel you to some great things. Our guys have responded the last couple weeks, and they’ve gotten a couple tough wins.”

Toledo held a 28-17 advantage at halftime, but saw the lead go down to one, 28-27, when the Golden Flashes scored late in the third quarter.

Seymour scored his second touchdown of the game to put Toledo up, 35-27, with 11:49 left. But Kent State responded with a 15-play, 70-yard drive that culminated with a five-yard TD pass from QB Dustin Crum to Keenan Orr on fourth down. Trailing by two, 35-33, the Flashes went for two, and Crum came up inches short on the rushing attempt.

Toledo never let KSU have another chance to score by controlling the ball for the remainder of the game.

Toledo’s offense racked up 483 yards of total offense, including 289 yards on the ground. Junior Eli Peters led the passing game, completing 15 of 25 passes for 194 yards and one score.

Up next, the Rockets host Northern Illinois on Senior Night Wednesday, Nov. 13, in the Glass Bowl.