It’s November, and in the world of college football, that means MACtion, and with MACtion comes the annual showdown between Toledo and Northern Illinois.

The Rockets and Huskies will meet in the Glass Bowl Wednesday, Nov. 13, at 8 p.m. The game will be broadcast on ESPN2. 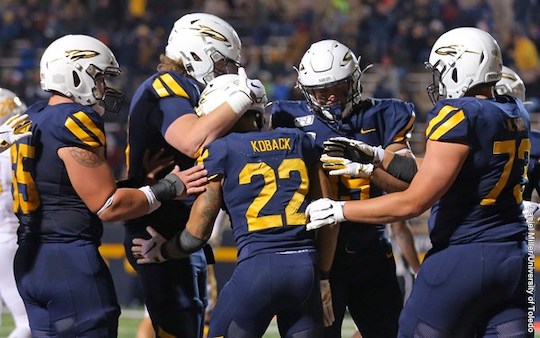 The Rockets enter Wednesday’s home game vs. Northern Illinois a half-game out of first place in the MAC West Division.

In every single season since 2010, Toledo and NIU have met in November with the MAC West title still at stake for one or both schools. Despite the fact that both teams have multiple conference losses this season, this year’s matchup could be a factor in determining the West Division representative to the Mid-American Conference Championship Game Dec. 7.

Toledo (6-3, 3-2 MAC) is still in the thick of the division race. The Rockets are a half-game behind Western Michigan and Central Michigan (both 4-2) and tied with Ball State (3-2). Toledo and CMU meet in the season finale in Mount Pleasant Friday, Nov. 29.

Toledo is coming off two consecutive home wins, most recently a 35-33 thriller over Kent State Nov. 5. Junior Shakif Seymour rushed for a career-high 175 yards and two touchdowns to lead the Rockets. Seymour, taking over as Toledo’s main running option due to a first-half injury to sophomore Bryant Koback, gained 40 yards and two first downs in Toledo’s final possession as the Rockets ran out the clock and held on to the victory.

Northern Illinois is coming off a 48-10 loss at Central Michigan Nov. 2. The Huskies rank third in the MAC in total defense, allowing an average 372.7 yards per game. The offense is led by senior quarterback Ross Bowers, who is second in the MAC with 243.4 yards passing per contest.