Toledo senior center Bryce Harris was recently named one of 20 semifinalists for the fifth-annual Jason Witten Collegiate Man of the Year. The award honors the college football player who has the best record of leadership by exhibiting exceptional courage, integrity and sportsmanship both on and off the field.

A two-time All-MAC selection, Harris is on the watch list for both the Rimington and Outland Trophies. He is a three-time Academic All-MAC honoree and is pursuing his graduate degree in school counseling. 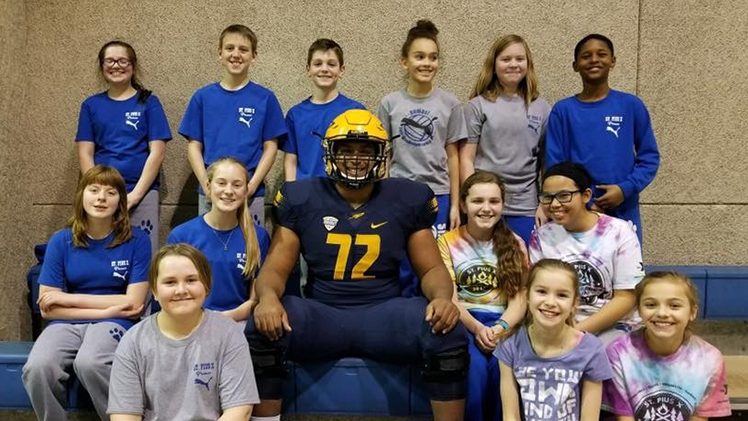 Bryce Harris poses with students from St. Pius X Catholic School in Toledo, where he completed his externship. The Toledo senior center said the program has been the highlight of his academic experience.

Harris has been a stalwart in the Toledo community and in his hometown of Akron. He has been a regular volunteer at local Boys and Girls Clubs and hospitals, and he has also been involved with the Special Olympics, the Toledo Food Bank and the Fellowship of Christian Athletes.

He recently helped raise $3,000 for Firestone High School seniors in Akron for the Always Climbing Project, which provides scholarships for student leaders who are high-spirited and supportive of their school community. He also served as the Rockets’ team organizer to collaborate with the Tabernacle Church in Toledo to create Christmas boxes for underprivileged youth.

Harris said the highlight of his academic experience has been an externship at St. Pius X Catholic School in Toledo. There he worked with students in a classroom, helping them with their assignments, but also getting to know them as individuals, listening to their problems and offering guidance. He was required to work 60 hours in the program but enjoyed it so much he volunteered for an additional 60 hours. He also participated in an after-school program at St. Pius, spending time with students until their parents or guardians were able to pick them up.

Three finalists will be named for the Jason Witten Collegiate Man of the Year award on Wednesday, Dec. 15. The winner will be announced at the award ceremony in Frisco, Texas, on Feb. 17.

The winner of the Jason Witten Collegiate Man of the Year will also receive a $10,000 contribution in his name to his school’s athletic scholarship fund. The contribution will be made by Jason Witten’s SCORE Foundation, the official charity of Witten and his wife, Michelle.

The SCORE Foundation, founded in 2007, has positively impacted tens of thousands of children and families in Texas and Tennessee over the last 14 years. The foundation operates its nationally recognized SCOREkeepers program, which places trained male mentors on staff to work with children at family violence shelters in the two states.