Two teams of students from The University of Toledo College of Pharmacy and Pharmaceutical Sciences are receiving accolades for their performances at state and national clinical skills challenges.

Late last month, a team of third- and fourth-year students in the UToledo Doctor of Pharmacy Program made it to the quarterfinals of the American College of Clinical Pharmacy’s Clinical Pharmacy Challenge competition. 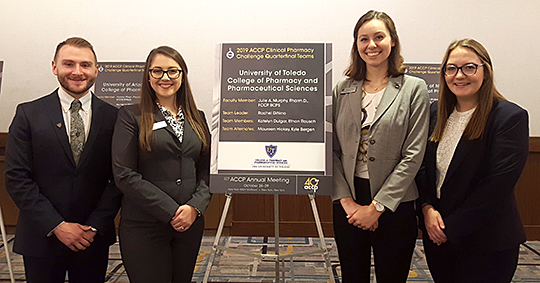 The competition, held at the 2019 ACCP Annual Meeting in New York City, was a mix of quiz bowl-style question-and-answer rounds and a clinical case round in which students were asked questions related to the provided case text, supporting physical exam and laboratory results, and medical history.

The UToledo team, made up of fourth-year students Rachel DiNino, Kyle Bergen, Ethan Rausch and Katelyn Dulgar, and third-year student Maureen Hickey, finished among the top eight of 120 teams that competed nationally.

It was the first time a UToledo team has made it to the quarterfinal round since the University began competing in 2013. The team is advised by Dr. Julie A. Murphy, assistant professor of pharmacy practice. 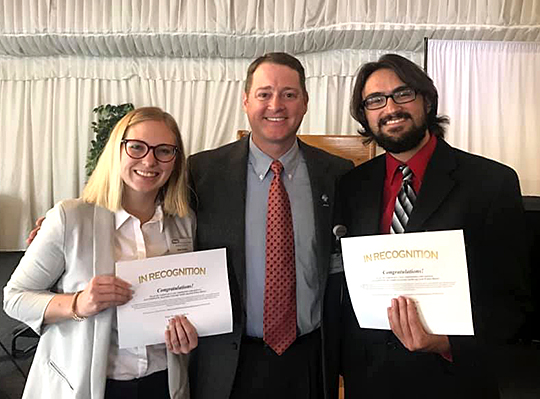 Gentry and Baddour, who beat out teams from all seven of Ohio’s pharmacy schools, are scheduled to compete in the national Clinical Skills Competition held by the American Society of Health-System Pharmacists at its Midyear Clinical Meeting next month in Las Vegas.

There, they’ll be tasked with completing a two-hour written assessment on a patient case. The top 10 teams in the nation will then give a two-minute oral presentation and an eight-minute question-and-answer session to a panel of judges.