The Ryan White Program at The University of Toledo Medical Center will recognize World AIDS Day with a screening of new material from the film “HIV in the Rust Belt” on Wednesday, Dec. 1.

The free, public event begins at 5 p.m. in the Lloyd A. Jacobs Interprofessional Immersive Simulation Center on UToledo’s Health Science Campus. Reservations are not required. 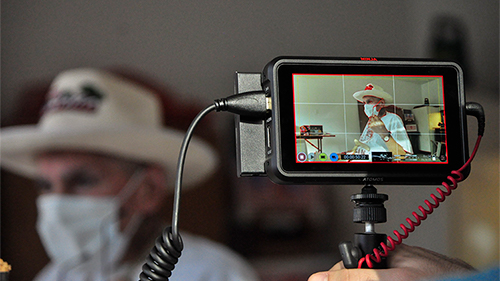 “HIV in the Rust Belt” is an in-process documentary from UToledo faculty members that focuses on the lives of local long-term HIV survivors and their connection to David’s House Compassion, a grassroots organization that provided unprecedented HIV care during the height of the HIV/AIDS epidemic.

The material being screened on Wednesday features the story of Tishina Jackson, an African American woman living with HIV since the mid-1990s. Newly edited video of an interview with Isaac “Chico” Calderon, a long-term HIV survivor and former resident of David’s House Compassion, also will be shown.

The film is a collaboration between director Holly Hey, professor of film, and co-producer Dr. Ally Day, associate professor of disability studies at UToledo.

Following the screening, there will be a panel discussion featuring Hey, Carter and Jackson, along with Dr. Joan Duggan, a UTMC infectious disease specialist and medical director of UTMC’s Ryan White Program.

The event is sponsored by the Ann Wayson Locher Memorial Fund for HIV Care held at The University of Toledo Foundation, a fund created for HIV care and research.

This year marks the 40th anniversary of the virus being officially recognized in the U.S.

According to the U.S. Centers for Disease Control and Prevention, nearly 37,000 people living in the United States or one of its dependent territories were newly diagnosed with HIV in 2019. In total, the CDC estimates there are approximately 1.2 million Americans aged 13 and older who are living with HIV.

World AIDS Day, which was first observed in 1988, is one of the longest-running disease awareness initiatives of its kind.