Being a student in the United States wasn’t new to Merveilles Tshitenge Mukadi, but fitting into a new culture and finding where you belong can present a challenge.

Tshitenge was ready for that challenge — inside and outside the classroom and on the court.

Tshitenge, who was born in the Democratic Republic of the Congo but raised in Switzerland, joined UToledo after being recruited from an Oklahoma community college to play basketball. She played for three seasons with the Rockets from 2016 to 2019.

On Saturday, Tshitenge will graduate with her master’s degree in counselor education with a concentration in school counseling. She completed her bachelor’s degree in recreation therapy at UToledo in 2019.

Her five years at UToledo have given her more than academic experience and memories that’ll last a lifetime — but also additional language skills to propel her into her next adventure.

International students navigate many new experiences as they come to the United States, including possibly learning and using a brand-new language. Tshitenge, whose native language is French, was determined to learn English — so she taught herself. 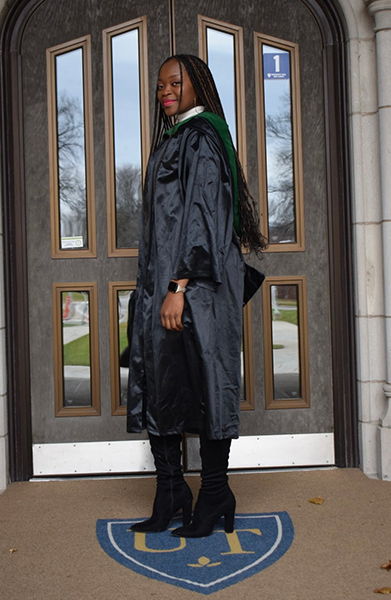 “Since I speak so many other languages, learning English was not as challenging as I thought it would be,” Tshitenge said. “Plus, I was spending a lot of time with my teammates, which helped speed up that process. I also think that not having someone to translate for me helped me figure things out faster.”

Although she was independent in teaching herself English, many UToledo faculty members provided assistance — including Dr. Madeline Clark, counselor education program director and associate professor.

Clark is more than certain that Tshitenge is prepared to create a positive impact in her future students.

“Mae has been a hardworking international student balancing many roles as a graduate student in our school counseling program,” Clark said. “Despite an on-going pandemic, Mae has worked hard throughout her time in our program to develop her skills as a professional school counselor and is an asset to the students she serves.”

Aside from being on the women’s basketball team, Tshitenge was involved in the African People Association and the Congolese Student Association.

As for her favorite memories, Tshitenge said she’ll always remember the roar and cheers of the crowd at football and basketball games.

“I have always been a sports person but prior to coming to the U.S., I had never watched and experienced football games,” Tshitenge said. “I really enjoyed it once I learned the rules.”

As her time as a Rocket comes to an end, Tshitenge is excited for her next adventure as a school counselor in Sacramento, Calif. And she will continue to achieve anything she sets her mind to with her favorite quote in mind: “Success is a sum of small efforts.”