They will join nearly 1,500 performers from 200 bands in 45 states and Puerto Rico, all working together to produce a virtual college marching band show that will premiere as an online video during halftime of the College Football Playoff national championship game on Jan. 11. 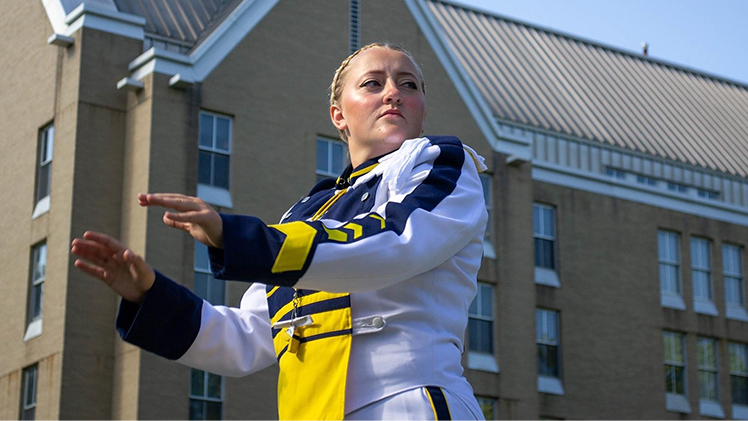 Ashley Venrick, a fifth-year drum major majoring in music education, is one of eight members of the Rocket Marching Band participating in the Intercollegiate Marching Band’s Jan. 11 virtual performance.

The performers from the Rocket Marching Band are:

“The dedication and creativity demonstrated by all our student members this fall is a credit to their attitude and character,” said Dr. Andrew Rhodes, UToledo associate director of bands. “We are so thankful to have such outstanding individuals representing the passion of our Rocket Marching Band on the national stage and taking part in this exciting showcase of excellence.”

The College Band Directors National Association and its Intercollegiate Marching Band initiative will combine college marching bands from different confer­ences, regions and styles in a single performance of “End of Time” by Beyonce.

The performance will showcase all of the aspects of a college halftime show including musicians, drum majors, color guard members, dancers and majorettes.

“This is going to be a historical performance,” said Dr. Mark Spede, president of the College Band Directors National Association and the director of bands at Clemson University. “In this unusual year when bands have been unable to perform their traditional pregame and halftime shows during college football games, CBDNA is pleased to offer this opportunity with the help of its partners.”