Rocket Alumni to be Celebrated at Sept. 30 Homecoming Gala

The University of Toledo Alumni Association will recognize its distinguished graduates at the Homecoming Alumni Gala on Friday, Sept. 30, at 6 p.m. in Thompson Student Union Auditorium.

Tickets for the gala are $35 per person and may be purchased by visiting the UToledo Alumni Association website or by calling the Office of Alumni Engagement at 419.530.2586. The deadline to purchase tickets is Friday, Sept. 23. 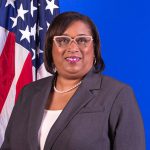 The Gold T award is presented to a University of Toledo graduate in recognition of outstanding achievement in his or her field of endeavor while providing leadership and noteworthy service to the community.

The 2021 Gold T award will be presented to Shannetta Griffin, a 1985 graduate of UToledo who has close to 40 years of experience as a professional engineer and a small business advocate within the private and public sectors of the transportation industry, with an emphasis on aviation. She was appointed associate administrator of airports for the Federal Aviation Administration in June 2021. 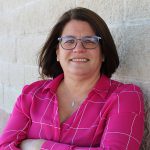 Laurie Adams, a 1986 UToledo graduate, received her bachelor’s in civil engineering and has become a recognized leader in traffic and safety across Ohio and in southeast Michigan. Adams works with communities to develop safety initiatives, access management regulations and Safe Routes to School plans. She continues to serve as a Rocket on several boards and committees at her alma mater. In 2015, she was named the Civil Engineering Outstanding Alumna. 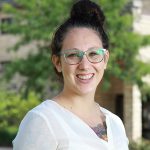 The Edward H. Schmidt Outstanding Young Alum award is presented to a University graduate who is 40 years of age or younger in recognition of outstanding achievement in their career while providing leadership and noteworthy service to the Alumni Association, University or community. This award is named in memory of Ed Schmidt, a 1942 alumnus and a longtime supporter of The University of Toledo and its Alumni Association.

Danielle Lutman, who received her bachelor’s (2015) and her master’s (2017) from UToledo, has served as a trailblazer for LGBTQA+ initiatives, equity and inclusion on the University’s campuses. She worked to establish gender-neutral housing and bathrooms on campus and was part of the planning committee for Take Back the Night Toledo, a local grassroots event to raise awareness of sexual and domestic violence.

College of Arts and Letters. Jacqueline Calmes, 1977, is a national columnist for the Los Angeles Times. Based in Washington D.C., she has covered national politics — including Congress, the White House and presidential campaigns — for more than 30 years. Before joining the L.A. Times in 2017, initially as the White House editor, she covered the Obama administration for The New York Times in its Washington bureau from mid-2008 through 2016.

John B. and Lillian E. Neff College of Business and Innovation. Steven Klar, 1969, is the president of The Klar Organization, a diversified real estate development firm centralized in New York City. Previously, he served on active duty for the U.S. Army in Fort Jackson, South Carolina, where he earned the Outstanding Soldier Award and was a candidate for Congress in 1978. Klar has a long list of charities and humanitarian efforts he supports, including the endowment of the Klar Leadership Academy at UToledo in 2014.

College of Engineering. Dr. Marla Perez-Davis, 1987, serves as the director of the NASA John H. Glenn Research Center in Cleveland. She is responsible for planning, organizing and directing the activities required in accomplishing the missions assigned to the center. Pérez-Davis is the recipient of numerous NASA awards including the NASA Outstanding Leadership Medal and the prestigious Presidential Rank Award for Meritorious Executives.

College of Graduate Studies. Dr. Joseph Dake, 1997, 1998, 1999, 1999 and 2002, has worked at UToledo since 2006, currently as a professor of public health and chairperson for the Department of Population Health. He has taught hundreds of students and mentored many doctoral students who are now successful public health faculty members across the country. Dr. Dake serves as a national and local leader for health equity, supporting various efforts to achieve that goal.

College of Health and Human Services. Dr. Christie Jenkins, 2001 and 2009, began working in the social service field more than 27 years ago in domestic violence safe houses as a child advocate, life skills trainer, crisis intervention specialist and court advocate. She is the CEO of the Family and Child Abuse Prevention Center and Children’s Advocacy Center. She has presented locally and at the state and national levels on various topics affecting counselors and their clients. Throughout her career, she has received several awards for her service.

Judith Herb College of Education. Dr. Cecelia Adams, 1980, 1991 and 1996, is a Toledo native and product of Toledo Public Schools. Adams has dedicated her career to the area’s education system. During her 35 years of service, she received The Award of Excellence from TPS and was selected as Science Teacher of the Year by the Ohio Academy of Science. She was promoted to positions including assistant principal and summer school principal, curriculum specialist, school improvement leader and assistant superintendent. She also served on Toledo City Council.

College of Law. The Hon. Myron Duhart II, 1996, is a judge of the Ohio Sixth District Court of Appeals. He assumed office in February 2021. Prior to joining the court, Duhart ran the Law Office of Myron Duhart. He also has served as an attorney for the judge advocate general in the U.S. Army. Duhart is a member of the Ohio State Bar Association, Lucas County Bar Association and Toledo Bar Association, in which he serves as president. Judge Duhart also serves as president of the University of Toledo College of Law Alumni Board of Governors.

College of Medicine and Life Sciences. Dr. Ada Stewart, 2000, has been a practicing family physician with Cooperative Health since 2012 and serves as its lead provider and HIV specialist. A member of the American Academy of Family Physicians since 1995, Stewart has served in several leadership positions at the state and national level. Stewart also has committed her career to ensuring uninsured and low-income families have access to high-quality healthcare.

College of Natural Sciences and Mathematics. Dr. Douglas Geiger, 1982, 1984, 1984 and 1987, is a board-certified surgeon specializing in neurological surgery and orthopedic surgery of the spine. Dr. Geiger has clinical interests in reconstructive surgery, deformity surgery in children and adults and minimally invasive spine surgery. He has been in practice for more than 20 years.

College of Nursing. Kevin Poitinger, 1989, is a decorated U.S. Air Force Colonel and senior executive with more than 30 years of healthcare leadership experience. He is the CEO at Holly Hill Hospital in Raleigh, North Carolina. In this role, he leads the state’s largest private behavioral health hospital, supporting 296 licensed beds with approximately 9,000 annual admissions. During his military career, Poitinger served as director of aeromedical evacuation operations for air mobility command and completed three medical command tours.

College of Pharmacy and Pharmaceutical Sciences. Dr. Gireesh Gupchup, 1990 and 1993, has a career in pharmacy administration that enables him to work with two passions: education and pharmacy. His current role is the vice president for academic innovation, planning and partnerships for the Southern Illinois System. He also spent many years at Southern Illinois University Edwardsville (SIUE) as professor of pharmacy and director of university-community initiatives. He also served as the founding associate dean and dean of the SIUE School of Pharmacy for eight years.

Jesup Scott Honors College. Dr. Kevin Hayes, 1981 and 1983, entered his esteemed career as an author by accepting a tenure-track position in the English department at the University of Central Oklahoma. In 1996 he published “A Colonial Woman’s Bookshelf,” which established him as a leading expert in the early American history of books and reading. Several of his books have received national recognition, including the Virginia Library History Award and George Washington Book Prize.

University College. Brian Carpenter, 1992 and 2010, is an artist, curator and assistant professor based in Toledo. Utilizing a range of media through 2D and 3D methods, his work explores the pathological constructs of affliction and its relationship to history and cultural identity. Carpenter is the co-founder and director of curation of Contemporary Art Toledo, a non-profit organization dedicated to the production, presentation and promotion of ideas from visual artists from around the Great Lake region and the world.